Protest against ‘Sunburn Festival’ at Chandani Chowk (Pune) organised by Bavdhan residents and devout Hindus. It is shameful for the Government that Hindus have to agitate to conserve Samskruti ! Why don’t the Government ban such programs on its own ? – Editor, Dainik Sanatan Prabhat

Pune : Protest against ‘Sunburn festival’, glorifying western culture, was held on behalf of villagers of Bavdhan, Lavale and surrounding areas, HJS and other devout Hindu organisations at Chandani Chowk. A warning was given on this occasion saying that ‘Sunburn festival’ will not be allowed at Bavdhan – Lavale in any situation. In the Holy land like Pune known for land of knowledge, where Shivaji Maharaj had resided, a programme like Sunburn encouraging consumption of intoxicating drinks and addiction should not be allowed. Up till now the organisers of this programme have cheated Goa Government and Maharashtra Government by not paying the required taxes. They have disregarded the Government rules. To allow such programs is a conspiracy to spoil young generation. Dignitaries have also opined that such programmes should not be allowed. More than 400 villagers and devout Hindu volunteers had participated in this agitation with great enthusiasm. (Congratulations to villagers and devout Hindu volunteers uniting to save culture ! If such unity is shown by Hindus all over, then no one would dare to hold such baseless programmes in Bharat ! – Editor, Dainik Sanatan Prabhat) 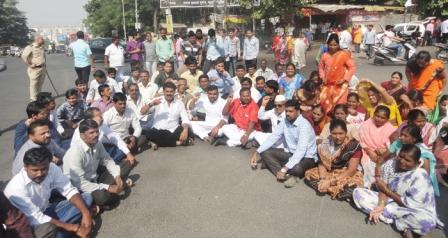 Shri. Sameer Tangade, Shrishivpratishthan Hindustan : On one side the Government lays down stringent conditions on the celebrations of Ganeshotsav, Shivjayanti and on the other hand, despite disregarding the rules by organisers of Sunburn festival, allows to it. The Government should take cognizance of the public sentiments and should not allow Sunburn festival in Pune, or else face severe consequences.

Shri. Kiran Dagade – Patil, Councillor : Government is showing double standards; one law for Hindu festivals and another for ‘Sunburn festival’. Why so ? We will oppose this festival till the end. They may arrest us, does not matter !

Shri. Chandrakant Warghade, Mahiti Seva Samiti : Sunburn festival is allowed despite disregarding the rules, evading tax payments by its organisers. Therefore it appears that the organisers might have purchased all Government machinery.

Shri. Parag Gokhale, HJS : Samiti will continue to oppose the Sunburn festival having the background of corruption and evading taxestill it is banished from Bharat.

Shri. Shambhu Gaware, Sanatan Sanstha : In the earlier programmes of Sunburn, drugs were openly sold. Government only should ban such programmes.