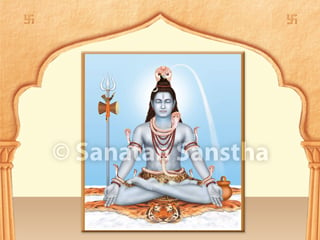 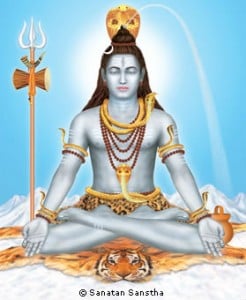 On the day of Mahashivratri, Lord Shiva’s Principle is a thousand times more active when compared to other days. To benefit most from the Shiva Principle on this day, chant maximum of II Om Namah Shivay II and worship Lord Shiva with bhav. There was a cruel hunter who was a great sinner. Once when he went to hunt, he came across a Shiva temple. Since it was the day of Mahashivratri, he saw many people performing worship devoutly, singing bhajans (Devotional songs), kirtans (Devotional discourses) etc. He made fun of them, saying that they were fools who consider a stone to be a God and chant ‘Shiva, Shiva’ and ‘Har Har’, and he proceeded to the jungle. He climbed a tree to look out for a prey; but the tree leaves blocked his vision. He began to pluck the leaves. At that time, he was chanting ‘Shiva, Shiva’. The leaves he plucked fell on a Shivapinḍi that was beneath the tree. At the break of the day, he saw a deer. He was about to release a bow when the deer begged for its life. The deer also told the hunter what happens when a sin is committed, and went away. The tree was a bilva tree. Unknowingly, the hunter had remained awake through the night, had offered bel leaves to Shiva and chanted Shiva’s Name. All this destroyed his demerits and he obtained knowledge.

This story indicates how Shiva is pleased even with a worship performed unknowingly.

1. Method of performing the vrat

Fasting, worship and remaining awake the whole night are the three aspects of this vrat.

2. Ritual of the vrat

One should have only one meal on Magh Krushna Trayodashi. On the next day, that is, Chaturdashi morning, the sankalp for the vrat should be made. In the evening, bathe in a river or a lake according to religious restrictions. Wear a rudraksha and apply bhasma. At the time of Pradosh, go to the temple of
Shiva, meditate, perform shodashopchar-puja and offer water to the deceased ancestors for well-being. Shiva should be offered 108 lotuses or bel leaves, accompanied by chanting. Then arghya should be given after offering flowers. After worship, recitation of verses and chants of moolmantras, a flower, which is removed from the head of Shiva, should be kept on the head and we should ask for pardon for our sins.

It is said that Shiva should be worshipped four times in the four parts of the night of Mahashivratri. This is called Yam-puja. In every Yam-puja, God should be given an sabhayang snan. Anulepan (applying scented paste) should be performed, also leaves of dhatura (Mexican poppy), mango and bel should be offered. Arti should be performed with 26 lit lamps, made from flour of rice. At the end of the worship,108 lamps should be donated. Each worship has different mantras. Arghya should be given while reciting these mantras. Dancing, singing and listening to stories etc. should be done to remain awake through the night. At dawn, Shiva should be worshipped again, after a bath. A meal should be offered to a Brahman to mark the end of the fast. After taking his blessings, the vrat should be concluded.

Concluding ceremony should be performed after doing this vrat for twelve, fourteen or twenty four years.

4. Science in the worship of Shiva on Mahashivratri

The function of the ‘Shivpindi’ 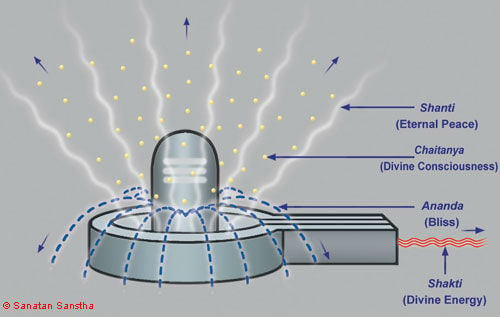 A. Emitting waves of Knowledge, Devotion and renunciation

Predominantly ‘sattva’ waves of knowledge, ‘raja’ waves of devotion and ‘tama’ waves of Renunciation (Vairagya) are emitted by the ‘Shivpindi’. During Mahashivratri, the emission increases by 30 percent.

B. Emission of subtle vibrations of chaitanya, bliss and peace

The ‘Shivpindi’ emits subtle vibrations of chaitanya, bliss and peace. During the Mahashivratri, the emission increases by 25 percent. This helps purify the subtle-body of one who worships the Shivpindi on this day. The ‘sun’ or the ‘moon’ channels in the body get activated as per necessity. The capacity to absorb the sattvaguna and chaitanya also increases. Due to the presence of the unmanifest Shiva principle in the Shivpindi and the vibrations of peace emitted, the Shivpindi remains cool and the mind too experiences peace. Worship of Shivpindi with devotion, activates the dormant Shiva principle. An offering of puffed rice and milk reaches Shiva in the subtle form.

C. Receiving the ‘tarak or marak tatva (element)’ as required

There is a confluence of the manifest and the unmanifest elements along with the ‘tarak and marak tatva’ in the Shivpindi. (Tarak = Saviour; Marak = Destroyer). That is how worshipers receive the required element. The temperature of the Shivpindi increases due to the emission of the marak tatva and there one experiences bliss. Similarly, when the tarak tatva is emitted, the temperature drops and one experiences peace and bliss.

Articles related to Shiva and worship of Shiva