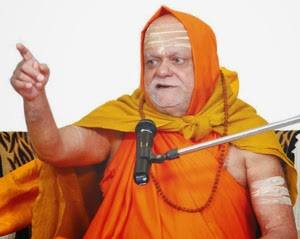 Ujjain : Simhastha Parva is not a place of fair or excursion, it is ‘Maha-Parva’; but it has become like a fair or excursion, stated Puri Peethadheeshwar Shankaracharya Swami Nishchalanand Saraswati Maharaj here. He also expressed his displeasure over Madhya Pradesh Government.

1. Central Government should set up a committee at Prayag, Haridwar, Nashik and Ujjain for Simhastha and Kumbh with Saints, scholars and experts as members. This committee should bring ‘Simhastha and ‘Kumbh’ in its original form.

2. One should not think about going to Simhastha as going for a picnic. It is a place of faith and devotion. People should earn merit by having bath in River Kshipra; be in company of Saints; achieve spiritual progress in life and take a good message from here for future life.

3. Earlier, Saints- Mahatmas, Acharyas and scholars used to come for Simhastha and used to not only protect Dharma and culture but also gave guidance by holding discussions on problems faced by nation and society.

4. Rulers used to discuss with Saints seeking their guidance and go back to act upon the same. Now, its nature has changed and political party which rules the country, changes the form of Simhastha as per its ideology. It is however, wrong.

5. Saints have always led society and given right direction to people.

6. Here in Simhastha-Parva, loudspeakers are fitted everywhere; creating noise pollution. It should be reduced as much as possible.

2.Very few people are found at programs like Saints’ ‘Katha’, discourse, ‘Keertan’ etc. but large number of people go for entertainment programs. A renowned newspaper has published news with a photo about only one person attending ‘Katha’-program.

3. Marquee and arches of many ‘akharas’, spiritual organizations, so-called Saints, ‘Katha-vachak’ etc. are glittering with lights. There is dazzle everywhere. People are more interested in such shallow things rather than listening to Saints’ discourses; as there are more of enthusiasts and picnickers instead of devotees.

4. People are more interested in going to ‘Kinnar-akharas’ permitted to be erected by Madhya Pradesh Government, than going to true Saints. Everywhere people are found asking for location of ‘Kinnar-akhara’. The Chief of this ‘Akhara’ named Lakshmi is controversial and notorious in Maharashtra; and involved in demanding approval for relations between homosexuals; involved in supporting anti-Dharma issues by taking out marches and taking part in TV programs for the same.

5. Most of the newspapers published in MP, having no knowledge of spirituality or Dharma, are giving lot of publicity by referring to Lakshmi as ‘Kinnar Akhara’s Acharya Mahamandaleshwar Lakshmi.

6. A famous ‘Katha-vachak’ from Vrundavan has started distributing ‘Shimla Paan Masala’, ‘Vimal Paan Masala’ packets to devotees after ‘katha’ in his marquee. It is said that companies producing such addictive things are suitably compensating him for the same. In his marquee therefore, there are advertisements of all addictive products in front portion of marquee to draw people’s attention.