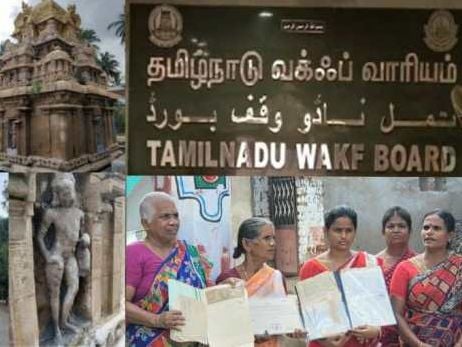 Days after news surfaced that the Waqf Board had encroached on an entire hamlet with a Hindu majority population in Tamil Nadu, Times Now has learnt that this village is not the only one. The report suggests that the Tamil Nadu Waqf board has claimed ownership of 7 such Hindu villages in the state. The villagers have additionally, alleged that the Waqf Board has also claimed that the 1500-year-old Sundareswarar Temple belongs to them.

Notably, the Waqf Board has placed posters across the villages claiming ownership of the village land.

Meanwhile, to refute the Waqf Board’s assertions, the locals displayed documents proving that the land had been in their family for centuries. The villagers were taken aback by the Islamic board’s claim to ownership of a centuries-old temple. They have urged the Tamil Nadu Chief Minister to intervene and assist them in stopping the Waqf Board from wrongfully snatching their property.

Villagers ask if is there no land for Hindus. Watch exclusive reactions of villagers only on Times Now. pic.twitter.com/E0fZx0VZKm

Jyothilakshmi, a Hindu woman living in one of the hamlets encroached by the Waqf Board reportedly told Tomes Now, “where will we go? This has come as a shock to me. I am getting palpitations and I had to go to the hospital.”

Tamil Nadu Waqf Board claims ownership of a Hindu-majority village

The issue was uncovered when Rajagopal attempted to sell his 1 acre 2 cents of land to one Rajarajeshwari. When Rajagopal, a resident of the nearby village Mullikarupur village arrived at the Registrar’s office to get the sale of his land registered, he was surprised to learn that the land did not belong to him and instead belonged to the Waqf Board.

Showing a 250-page letter from Tamil Nadu Waqf Board to Rajagopal, the registrar said that any sale of land in Tiruchenthurai village requires a no-objection certificate from the Waqf Board in Chennai.

When Rajagopal narrated the incident to the villagers, the entire villagers were shocked to learn that their land was not theirs. They wondered how Waqf Board can claim ownership of the whole village when the villagers have all the necessary land documents for their respective lands, both residential and agricultural.

When this subject was brought to the District Collector’s attention by the villagers, he stated that the matter will be investigated and action will be taken after that.