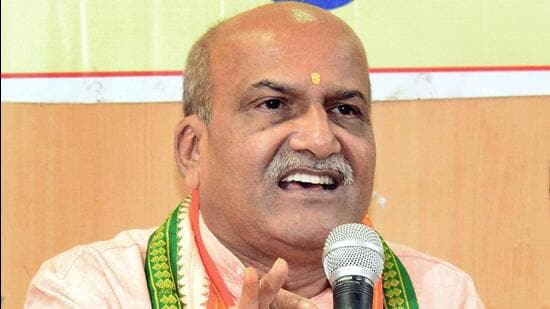 Rightwing groups in Karnataka on Friday demanded that all illegal churches be razed down using bulldozers to end forced conversion, a day after the state government promulgated an ordinance banning forced religious conversions in the state.

“Every single day, innocent Hindus are being converted as Christians by fraudulent means and systematically. So, the only way is to come up with a strong law to raze down illegal churches. I will give you a list of illegal churches and all of them should be brought down using bulldozers,” said Pramod Muthalik, chief of the Sri Rama Sene.

Rightwing groups on Friday met Karnataka home minister Araga Jnanendra and submitted a memorandum to probe a Mandya college student, Muskan and her family, who have travelled abroad in the garb of a pilgrimage.

Muskan had become a poster girl of the resistance by Hijab-wearing students in Karnataka after she stood up to saffron shawl-clad groups in Mandya’s PES college, about 100 km from Bengaluru.

Muskan’s actions were seen as one of the flashpoints of the Hijab resistance and she gained global attention with several prominent Muslim leaders showering her with gifts and cash.

Groups like Sri Rama Sene are allegedly targeting Muslims and Christians with barely any intervention by the state government which has been accused of condoning the actions of the right-wing groups to help consolidate Hindus before next year’s assembly election.

Bommai has also been accused of deflecting attention away from the lack of development programmes, and welfare schemes and masking the growing rift within his party and challenges to his leadership by fanning communal tensions.

In April, terrorist outfit Al-Qaeda too put out a video appreciating Muskan. In a nine-minute video, al-Qaeda chief Ayman al-Zawahiri said Indian Muslims should “react to this oppression”.

The controversy first started in a government school in the Udupi district when six students were barred from entering classrooms because they were wearing hijabs. A petition was then filed in the Karnataka High Court challenging the Udupi Government PU College’s decision.

However, a full bench headed by chief justice Ritu Raj Awasthi on March 15 held that Quran does not mandate the wearing of a hijab for Muslim women and that the attire “at the most is a means to gain access to public places” and a “measure of social security”, but “not a religious end in itself” in its 129-page judgement.

The high court also favoured a “speedy and effective” investigation into stoking up of the hijab controversy in Karnataka, suspecting some “unseen hands at work to engineer social unrest and disharmony in the state”.

BJP leaders from Karnataka mirrored the sentiments of right-wing groups who had made claims that the Hijab row was an “international conspiracy”.

“I had, on April 9, complained to the local police to probe her family and that they now are allowed to travel outside the country. But on April 25, the family travelled outside the country under the garb of a pilgrimage. We got suspicious and have demanded that the entire family be investigated and the actual reason for them to travel,” said Anil Marigowda, who identified himself as a pro-Hindu worker.