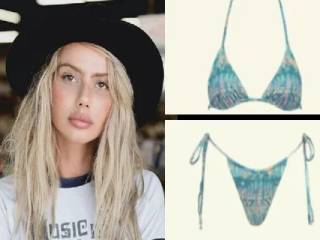 A day after Opindia reported how Sahara Ray has been selling underwear with the print of Hindu deities, the Australian surfer turned Only Fans model has deleted the contentious clothing collection from the website of her brand ‘Sahara Ray Swim.’

The swimwear was a part of the brand’s ‘Aura collection 2022’. Comprising mostly of thongs and micro string tops, the new collection featured images of Hindu deities on top of them. An archive of the collection can be accessed here.

Within 24 hours of outrage by the Hindu community on social media, ‘Sahara Ray Swim’ was forced to delete their entire collection. “0 products. Sorry, there are no products in this collection,” says the website of the clothing brand.

Following angry messages by netizens on the official contact page of ‘Sahara Ray Swim’, the brand has removed its contact information altogether.

The social media outrage has prompted the Only Fans model to turn her Instagram account private. She is yet to apologise or issue a statement for hurting the religious sentiments of 1.3 billion Hindus.

A clothing brand named ‘Sahara Ray Swim‘ has courted controversy by printing images of Hindu deities on its new collection of swimwear. The brand is owned by Sahara Ray, a young surfer turned Only Fans model.

The brand had released a new line of swimwear called the ‘Aura Collection 2022’. Comprising mostly of thongs and micro string tops, the new collection features images of Hindu deities on top of them. The contentious images have now gone viral on social media.

So, now in the name of Aesthetics, they are using Hindu Gods as prints on Bikini Bottoms & Tops.
This is Sahara Ray's swim wear company, Justin's ex.

Is this just for the design or they've a motive behind? Or If they are too religious? They should start it with Jesus, isn't it? pic.twitter.com/6K0qCEqi4D

So now in the name of asethetics they using Hindu gods as fashion design on their bikini tops and bottoms .What was thier motive behind it ? Why dont they try to put jesus as thier asethetics design😏😏😏😏 pic.twitter.com/o2fFAQ1ziK