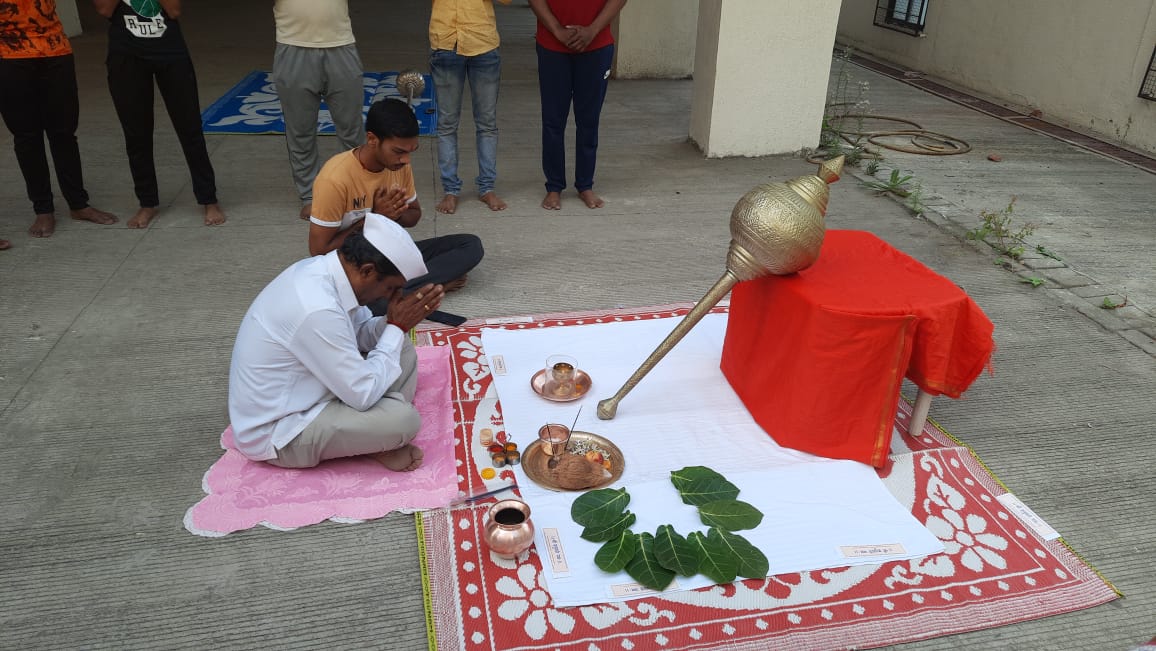 ‘Gadapujan’ (Worship of Gada – mace, seen in the hands of Deities such as Hanuman) was performed all across the nation on the occasion of Shri Hanuman Jayanti with a view of obtaining Divine strength to establish the Ramrajya, that is, Hindu Rashtra, and to awaken valour among Hindus by the grace of Bhagawan Shriram. The programme was organised by Hindu Janajagruti Samiti and other like-minded Hindu organisations. ‘Gadapujan’ was held at 218 places in Maharashtra, Goa, Karnataka, Delhi, Rajasthan, Uttar Pradesh and other states. The events were graced by Saints, while office bearers of various organisations and a large number of youth also participated wholeheartedly in the Pujan.

#HanumanJayanti
To give strength to the establishment of Hindu Rashtra and awaken valour among Hindus, 'Gadapujan' held at 218 places across the nation ! pic.twitter.com/MzALYmuysX

Mass ‘Gadapujan’ was organised at Mumbai, Thane, Raigad, Pune, Satara, Solapur, Kolhapur, Ratnagiri, Sindhudurg, Sambhajinagar, Nashik, Dhule, Jalgaon, Nagpur and Amravati in Maharashtra; Bagalkot, Dharwad, Shivamogga, Udupi, Dakshina Kannada, Mysore, Tumkur, Bangalore and Belagavi in Karnataka; Ponda and Sakhali in Goa; Mathura In Uttar Pradesh, Delhi and Rajasthan. The programmes commenced with Shankhanaad (Blowing of a conch) followed by collective prayers, ‘Gadapujan’ ritual, Arti of Deity Hanuman, recital of Maruti-Strotra and mass chanting of ‘|| Shri Hanumate Namaha ||’. Guidance was also provided on ‘How to inculcate the virtues of Deity Hanuman for reinstating Dharma’. At the end of the programme, the attendees pledged to establish the Hindu Rashtra.

The history of Hindus abounds with acts of valour. However over the last 75 years, hardly any programme has been implemented to awaken valour among Hindus. On the other hand, future generations of Hindus are being alienated from valour by giving the message ‘De di hame azadi bina khadag bina dhaal …’. When you look at the form of every Hindu Deity, while one hand is raised in blessing, all other hands carry weapons. Hindus should worship every form of the Deity. From that point of view, worshipping the weapons of Deities will help in awakening valour in Hindus. It takes courage to fight against injustice and oppression. So at least a symbolic worship of weapons should be performed on religious festivals. There should be an awakening of valour among Hindus. Hindu Janajagruti Samiti (HJS) stresses upon the need for Hindus to cherish the tradition of worshipping arms during their festivals as the main reason for conducting this programme.