Journalist Aarti Tikoo through her courage, valour and determination has made the social media giant Twitter kneels down in front of her.

Journalist Aarti Tikoo took social media giant Twitter to the court after Twitter senselessly blocked her handle for her tweet, where she is looking out for her brother Sahil Tikoo whose life is being threatened by Islamists. It was quite strange and unbelievable that Twitter indefinitely blocked her because she sought protection & safety for her brother Sahil Tikoo who is being threatened by Islamists. She not only fearlessly went for a battle with Twitter in court but also made sure that she wins the case. Just two days after Delhi High Court issued notice against Twitter on her plea, it accepted its defeat. On the 13th of January, Twitter restored her Twitter account after it blocked the account for 3 weeks.

On the 15th of December, journalist Aarti Tikoo, a Kashmiri Pandit herself, took to Twitter to raise alarm about Islamic terrorists from Kashmir issuing death threats to her brother. Two days later, on the 17th of December, Twitter India, the social media giant, decided to “lock” Aarti Tikoo’s account. The notice that Aarti got said that she could “unlock” her account if she deleted the tweet about her brother getting threats. 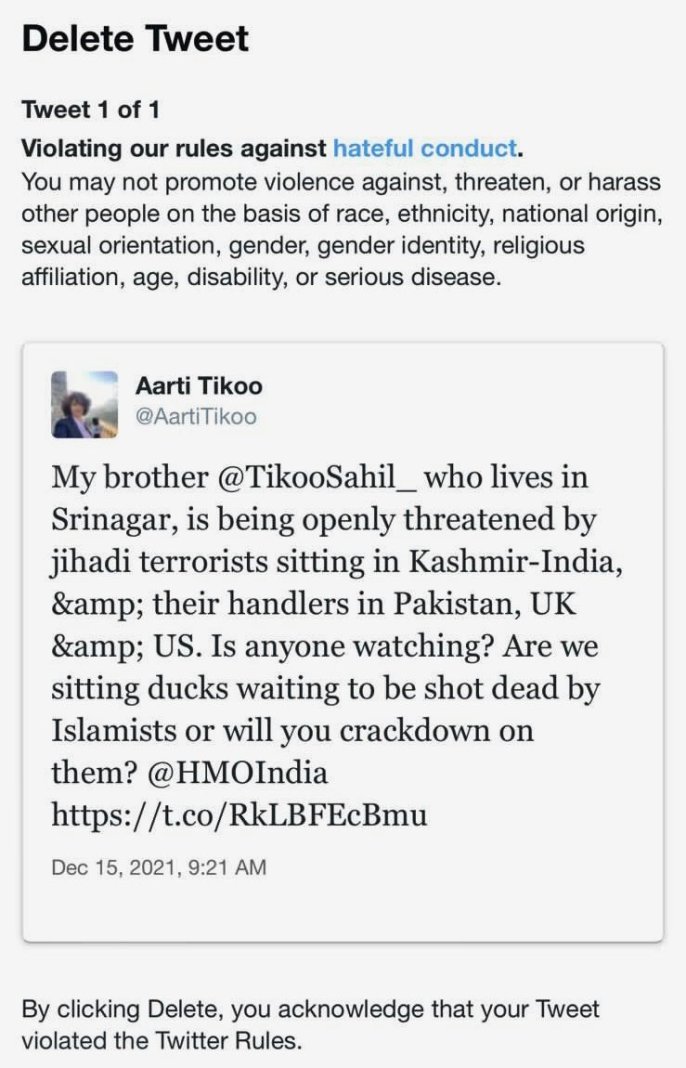 Aarti Tikoo had tweeted, “My brother @TikooSahil_ who lives in Srinagar, is being openly threatened by jihadi terrorists sitting in Kashmir-India, and their handlers in Pakistan, UK and US. Is anyone watching? Are we sitting ducks waiting to be shot dead by Islamists or will you crackdown on them?”. Saying this, Tikoo had tagged the Home Minister Office’s handle on Twitter.

Twitter, for some odd reason, decided that this tweet raising alarm over her brother getting threats violated their community standards. In the notice that Tikoo got to delete the tweet, Twitter deemed this tweet as targeting a group of people, threatening them or harassing them.

In the notice, Twitter said, “You may not promote violence against, threaten or harass other people on the basis of race, national origin, ethnicity, sexual orientation, gender, gender identity, religious identity, religious affiliation, age, disability or serious disease”. (How can asking protection for family from actual threats violate Twitter’s community standards? Many anti-nationals and Hinduphobes regularly tweet highly offensive material, but has Twitter ever locked them out of their account? – Editor, HinduJagruti.org)

In this instant too, Aarti Tikoo seems to have tweeted nothing that would go against Community standards. In fact, she raised alarm about her brother getting death threats. Twitter perhaps locked her account deeming that the use of the word “Jihadi” or “Islamist” was against religion, religious affiliation, or community that Twitter wishes to protect. Here, Twitter seems to have deemed a tweet, raising alarm over death threats, hateful to the people who were issuing the threats.

(The fact that a foreign organization dictates what is acceptable and unacceptable speech is alarming. This is clear intrusion into the functioning of a sovereign democratic nation. Twitter may have trained its people or its programs to detect certain terms and flag them but in this case a genuine cry for help is being suppressed which can have disastrous consequences. The Government of India should look into this. – Editor, HinduJagruti.org)