The main texts of Hinduism are the Vedas (considered most important), Upanishadas, the Mahabharata, and the Ramayana. These writings contain hymns, incantations, philosophies, rituals, poems, and stories from which Hindus base their beliefs.

George Bernard Shaw believed Hinduism to be a monotheistic religion. He said that Hinduism is so elastic and subtle that the most profound Methodist and crudest Idolator are equally at home with it.” 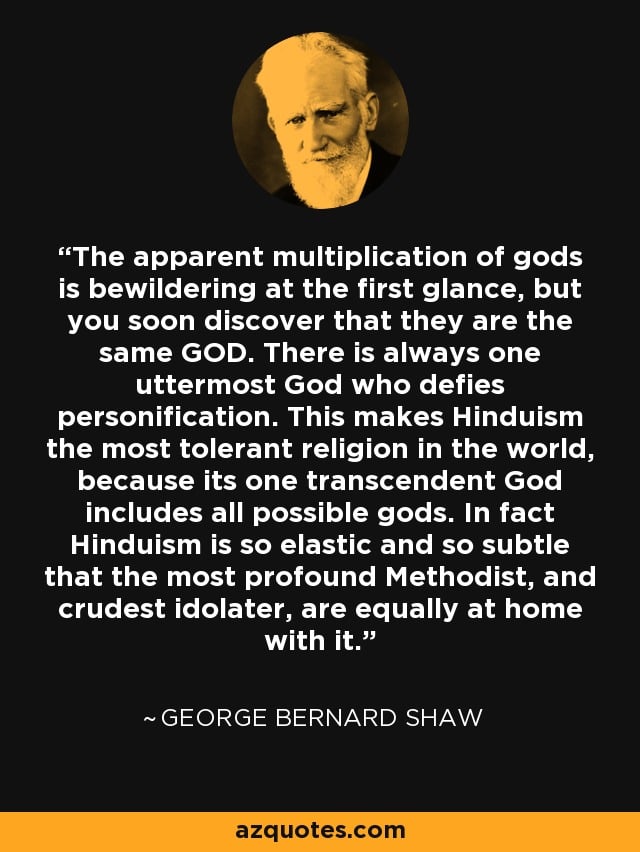 Sir Charles Norton Edgecumbe Eliot didn’t consider Hinduism as a religion but a way of life. He also said “The Hindu has an extraordinary power of combining dogma and free thought, uniformity, and variety, here utmost latitude of information is allowed and in all ages Hindus have been devoted to speculation”.

Mark Twain believed that the only way to save oneself from any danger, loss or harm would be through Hinduism. He also said ” Our most valuable and instructive materials in the history of man are all treasured up in India, it is already becoming clear that a chapter which had a western beginning will have to have an Indian ending if its not to end in self destruction of the human race. In Hinduism we have the attitude and spirit that can make it possible for the human race to grow together into a single family.”

Dr Arnold Toynbee believed in the concept of spreading love, honesty and attaining enlightenment- mentioned in the holy book of Hindus. He said that “This spiritual gift i.e Hinduism that makes a man human is still alive in Indian souls, go on and give the world Indian examples of it, nothing else can do so much to help mankind to save itself from destruction.”

Swami Vivekananda was proud to belong to a religion which taught the world forbearance at the time of adversity and a worldwide acceptance. He also said “I am proud to belong to a nation which has sheltered the persecuted and the refugees of all religions and all the nations of the earth. I am proud to tell you that we have gathered in our bosom the purest remnant of the Israelite s, who came to the southern India and took refuge with us in the very year in which there holy temple was shattered to pieces by Roman tyranny.”

Sir Monier Monier Williams relentlessly believed in the strength of infinite adaptability to the infinite diversity to the human character and human tendencies mentioned in the holy books of Hindus. He stated that “no description of Hinduism can be exhaustive which does not touch on almost every religious and philosophical idea that the world has ever known.”

Will Durant fervently believed in the teachings of Bhagwat Gita on tolerance, gentleness of mature mind and spreading love in the world. He further added – “It is true that even across the Himalayan barrier, India has sent such gifts such as grammar, logic, philosophy, fables, hypnotism, chess and above all numerals and the decimal system to the west.”

Thomas Berry believed Hinduism to be a dynamic process and said “For this reason, Hinduism must be studied not as a fixed body of doctrine but as a developing tradition that has changed considerably throughout the centuries and which is still changing in the creative direction, everything in India makes sense in the light of the changing process.”

Alain Danielou a.k.a Shiv Sharan believed that the Hindus live in perpetuity, while in Banarus, Danielou converted to Hinduism taking the initiates name of Shiv Sharan.