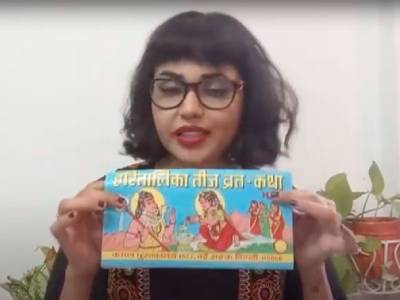 Journalist Sushmita Sinha is being criticized over social media. It is not about the left-leaning content she has posted but about a video that she made against fasting on Teej. In a video that she uploaded on her Youtube channel, she was heard saying, “I have spent Rs.15 of this piece of garbage (referring to a book on the story of Teej Vrat).  Now you tell me how I should use it? As a tissue paper or toilet paper?”

According to a tweet posted by Hindu IT Cell, she posted an Instagram story in which she showed the book hanging in her toilet in place of the toilet paper.

It is notable here that Haritalika Teej is a Hindu festival widely celebrated in North Indian states and Nepal where women observe a day’s fast and pray to God for the wellbeing of their family.

Leftists find pleasure in abusing gentle Hindus and Hindu believes. Here @Sushmitasinhaa, who works for @BoltaHindustan (owned by Mohd. Rahmani) uses Hindu texts as toilet paper! Give us any relevant details in my DM for FIR. We already have her linkedin, insta, FB. pic.twitter.com/K6wvrbHzAZ

This is not the first time she has posted anything against the Hindu faith and practices. On 6th August, she posted an image on her Twitter account and said, “Those who are alive didn’t get it, but a mere stone got it.” She was referring to the Ram Mandir as ‘the house for a stone’. 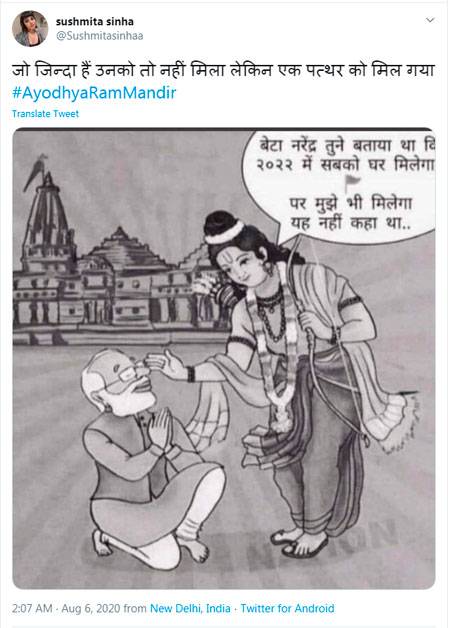 After her video was posted on social media, #ArrestSushmitasinha started to trend on Twitter, and several complaints were filed against her. Sushmita Sinha is a journalist with Bolta Hindustan which is a portal run by alumni of JMI. While the portal claims to post unbiased news, it is filled with anti-BJP content.

After demands of her arrest spiked on social media platforms, Sushmita posted a video on Twitter trying to play the victim card. She said that she only read what was written in the book of Teej fast and there was nothing wrong in what she did. She completely missed out the fact that she had used the book with photos of Hindu Gods as toilet paper that caused the controversy. She alleged that since her video went viral, she has been receiving a threat against her life and rape threats. She also said that people are threatening to burn down her house.

Many social media users have been demanding her arrest. Some users have also filed online complaints with cyber cells against the journalist for the blatant Hinduphobia and deliberate insult to the faith of Hindus by placing the Teej Vrat book on her toilet and sharing images of it.

This is an ongoing story. We will update it later with more information.