An organization named ‘Nimittekam’ based in Rajasthan is helping Pakistani Hindu refugees to get Indian citizenship. This organization has helped more than 2000 Hindus from Pakistan in obtaining citizenship of India. In fact, it is the duty of every Hindu to participate in this mission of obtaining Indian citizenship for Pakistani Hindus, stated Shri. Jay Ahuja, the President of this organization. In the year 2016, the Union Government granted permission for giving Indian citizenship to displaced Hindus from Pakistan. About 70 lakh Hindus are still stuck in Pakistan, owing to one historical mistake of India. Those Hindus are undergoing inhumanly torture every day. Hindus had no work in the world crisis of Corona pandemic and they had to go without food. In such situation, 15 lakh Hindus were offered food packets on the condition that they converted to Islam. Hindu young women are becoming victims of Jihadis. Their parents try to seek justice by going to political leaders, police and Courts but all in vain. Their only fault is they are born in Pakistan. Even then, those Hindus are optimistic of getting Indian citizenship, someday or the other.

Pakistani Hindus should get work based on their interests and skills ! – Meenakshi Sharan, social activist, Mumbai

The condition of Hindus in Pakistan is quite pitiable. Hindus are not given proper treatment either in political, economics, education or in social field. Despite kidnapping and raping of Hindu girls, Courts pass verdict in favour of fanatic offenders in Pakistan; therefore, aggrieved Hindus take shelter in India but they are not absorbed in the local main stream is a fact. Pakistani Hindus are trained in little skills and they start their small businesses; but those people are more interested in farming work. They enjoy working on farms and plantations. Pakistani Hindu women are experts in handicraft. They know well some of the ancient arts which have become almost extinct. Pakistani Hindus should be given work considering their interests; then they will quickly adjust here. I am trying to work on this issue. Pakistani Hindus are our own people, they are hard-working and they need support from Indian Hindus.

‘Saptarshi-aarti’ is performed at Kashi Vishwanath Temple for the past thousand years but this custom was stopped by the Government- appointed employees during the present period affected by Corona-pandemic. This custom was not stopped even during the regime of Aurangzeb but it was discontinued due to the Government’s control over this temple. We released a video on this issue. The Government realizing that the video had created awareness amongst people, lifted the ban and the ‘aarti’ is now being performed regularly as earlier. The Governments are taking over management of only temples; then why is it not taking over mosques and churches? This question was asked by Shri. Ashish Dhar, the joint-founder of an organization named ‘Pradnyata’ in New Delhi. He was speaking in the first session of the second day of (on-line) Ninth All India Hindu Rashtra Convention.

He said further, “Our organization makes videos on various attacks taking place against the nation and Dharma so that every citizen would come to know about them. We have so far released videos on social media on issues related to displaced Kashmiri Pundits, construction of Ram –Mandir, problems faced by Hindus in Bangladesh, life-history of Jogendranath Mandal (the first Law Minister of Pakistan), ban imposed on performing ‘aarti’ at Kashi-Vishwanath Mandir etc. These videos are getting spontaneous response.”

Incidents of murders of Hindu leaders in broad day-light, anti-national and anti-Hindu Dharma activities, caste-ism, terrorism, naxalism, activities of Christian missionaries and ‘jihadi’ terrorism are constantly taking place in Tamil Nadu. In districts where Christians are in majority, the district administration works on the directions of the concerned Bishop. China is the creator of Corona-virus while ‘Tablighi Jamaat’ is its propagator, stated Shri. Arjun Sampath while addressing the second session of ‘Ninth All India Hindu Rashtra Convention’ on its second day.

He further said, “Idols of Hindu Deities and Bharatmata are opposed by Hindu-haters in the holy land of Kanyakumari that was blessed by Swami Vivekananda with his presence. Population of Christians and Muslims is increasing in Rameshwaram district. Christian missionaries are supporting naxalism. Terrorist activities of ISIS are also increasing. Tamil Nadu Government has taken over Hindus’ temples and temples’ lands while Muslim Wakf Board is given grants on the other hand.

We will take to streets against attacks by Hindu-haters in Tamil Nadu ! – G. Radhakrushnan, Shiv Sena’s State President, Tamil Nadu

Members of Periyar and DMK are nurturing Hindu-hatred under the pretext of freedom of speech by insulting Hindu Dharma, its traditions, culture, ‘Stotras’ and Brahmin community. Incidents of attacks on Hindu Dharma are still happening in Tamil Nadu; but the position is not the same as earlier. Hindus are becoming aware and protesting against attacks on Hindu Dharma. Tamil Nadu Government issued an order asking temples to donate Rs. 10 crores for fighting Corona-pandemic. This order was not applicable to mosques and churches. Devout Hindus filed a case against the order in Madras High Court. The Court stated that the State Government’s order was illegal. We shall take to streets wherever there is attack on Hindu Dharma and give a legal fight, stated Shri. G. Radhakrushnan, the State-President of Shiv Sena. He was speaking on the topic of increasing influence of ‘jihadis’ and fanatic Christians in Tamil Nadu during the session held on the second day of (on-line) Ninth All India Hindu Rashtra Convention. He spoke on ‘Retaliation of jihadi terrorism’.

‘Halal’ means meat which can be consumed as per directions given under Islam. Some of the requirements also include that the butcher has to be a Muslim; he should recite ‘Aayat’ from Quran before using his knife for slaughtering and direction of the animal’s neck, which is being slaughtered, should be towards the direction of Mecca. The concept of ‘Halal’ is being opposed in many western countries by organizations working in the interest of protection of animals. Now, the concept of ‘Halal’ has not remained limited to just meat; but cosmetics, medicines, housing complexes are also brought under its purview. ‘Halal’ economy is nearly US $-2.4 trillion (1 trillion means 12 zeroes on 1 i.e. one thousand billion) which is almost as big as the present economy of India. This is an indication of India’s going back on the path of slavery. PM Narendra Modi had imposed a ban on Islamic Banks operating as per Shariat Act, few years ago. The present ‘Halal’ Certification system, however, is a conspiracy to provide finance for jihad and ‘Islamization’ of Bharat. It should be opposed in a lawful manner. System of ‘Halal’ Certification operated in secular India, which promotes Islamic economy, is in a way, defeat of secularism, stated Shri. Ramesh Shinde, the national spokesperson of Hindu Janajagruti Samiti.

1. Muslim countries have made it mandatory to have ‘Halal’ certification for carrying on trade in their countries. This certificate is issued in India by private Muslim organizations viz. ‘Jamiyat-Ulema-e-Hind’ and ‘Halal India’ etc.

2. Many companies in India are obtaining ‘Halal’ certificate for carrying on business. The money earned from the same is used for propagation of Islam.

3. Halal Certificate is like modern ‘jizia’ tax. It is, however, quite shocking that Government undertakings like Air-India, APEDA, IRCTC etc also approve meat with ‘Halal’ Certification.

4. There are Government organizations like FSSAI (Food Safety and Standards Authority of India) and FDA (Food and Drug Administration) for issuing certificates to food items, then where is the need for a parallel certification like ‘Halal’?

5. ‘Halal’ certification has affected the business of Hindu butchers’ community. Business of meat has gone into the hands of Muslims which is, in a way, boycotting Hindu butcher community and it is an offence under the Scheduled Caste and Scheduled Tribe (Prevention of Atrocities) Act.

6. Injustice is being done to Hindus in secular India through the medium of ‘Halal’ certification system and it is promoting Islamic economy. All should raise their voice against the same.” 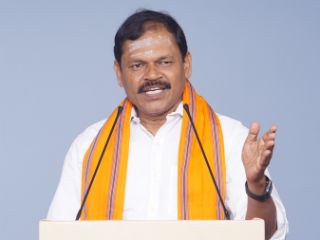 More than 2500 people of Tamil Nadu attended the program held by ‘Tablighi Jamaat’ at Delhi who turned out to be the ‘carriers’ of ‘Corona’ virus. On return, they were extended several medical facilities. The Government administrative officers visited the hospitals where they were admitted and congratulated them because they got cured of Corona. They were given a copy of ‘Quran’. All these things are beyond comprehension. On the other hand, there is discrimination in offering medical facilities to Hindus. All temples of Tamil Nadu, a State, that is land of temples, have been taken over by the Government and the funds are being looted; while on the other hand, the State Government gave 4500 metric tons of rice to Muslims during the period of Ramzan, not through Government machineries but in mosques.

The population of Christians is around 6% and that of Muslims is around 10% in Tamil Nadu. Despite Hindus being in majority, Christians and Muslims have a hold in politics. There is open opposition to idols of Hindus’ Deities and Bharat Mata in this State. Hindu leaders are killed. Naxalites’ activities are also going on. ‘Hindu-hatred and Bharat-hatred’ is the common thread among ‘jihadis’, fanatic Christians, communists and naxalites though their ‘modus operandi’ is different. ‘Jihadi’ terrorism like in Kashmir is growing rampantly in Tamil Nadu today. Conversions are taking place even through fields like education and medical aid. Hindus need to unite and fight,  in a lawful manner, against such anti-Hindu activities in Tamil Nadu.

1. Work undertaken by Hindu Janajagruti Samiti related to creating awareness amongst people towards Dharma-matters is most commendable. All Hindus need to unite and extend support to the demand of establishment of Hindu Rashtra. – Shri. Vivek Mittal

2. The information given by speakers in this All India Hindu Rashtra Convention is true. Creating awareness amongst Hindus is most essential. – Shri. Bharat Tomar