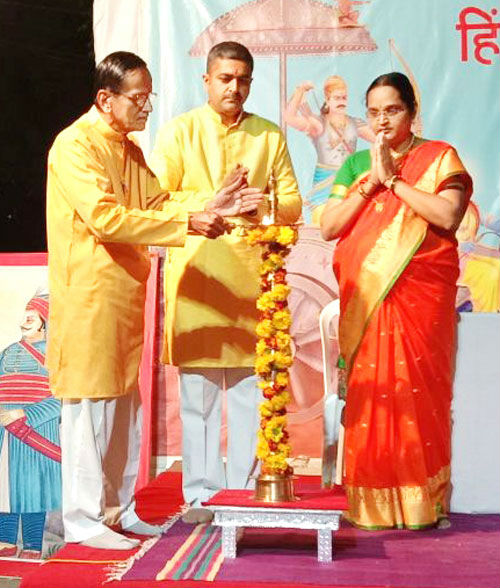 Amravati : Kashmiri Hindus had to face severe oppression and had to run away from own homeland. Hindus from other parts of India need to prepare themselves and they need to see to it that they didn’t face similar situation. Get ready for establishing Hindu Rashtra. Hindu Dharma has undergone various types of attacks. Today, it is our duty to make efforts for establishing Hindu Rashtra, by uniting Hindus to face the problems, stated Shri. Hemant Khatri of Hindu Janajagruti Samiti (HJS) while addressing ‘Hindu Rashtra-jagruti Sabha’ held at Wadali on 19th January. The ‘sabha’ was started with lighting of lamp by ‘Pujya’ Ashok Patrikar, ‘Dharmapracharak’ of Sanatan Sanstha which was attended by 250 devout Hindus.

Hindus can get justice only by establishing Hindu Rashtra ! – Vinay Panwalkar 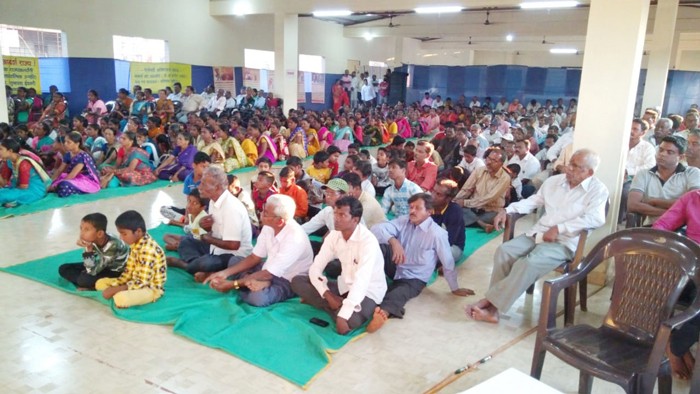 Jakadevi (Ratnagiri) : ‘Where population of followers of Christianity is more, that is Christian nation; where there is majority of Muslim population, it is Islamic country; similarly, where Hindus are in majority, it should be a Hindu nation. India should have been declared as a Hindu Rashtra but that didn’t happen; therefore, we Hindus are facing injustice everywhere. Now, only Hindu Rashtra will get justice for Hindus,’ stated Shri. Vinay Panwalkar of Hindu Janajagruti Samiti (HJS).

‘Hindu Rashtra-jagruti Sabha (sabha)’ was held on Sunday, 19th January at the hall of Jakadevi High School which was addressed by Shri. Vinay Panwalkar. 550 devout Hindus attended the ‘sabha’.

The ‘sabha’ was started with blowing of conch; followed with lighting of lamp by Shri. Vinay Panwalkar of HJS and Shri. Daivesh Redkar of Sanatan Sanstha. Kum. Narayani Shahane of HJS explained about various activities undertaken by HJS, to the participants while Kum. Mithila Wadekar did compeering of the ‘sabha’.

Establishing Hindu Rashtra will lead to welfare of not only this nation but also of the world ! – Parag Bind, HJS 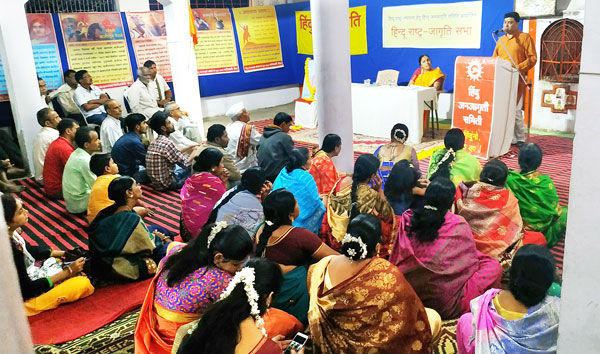 Wardha – ‘Dharma and nation are not two different things for us. All our ‘Dharma-Purush’ were also ‘Rashtra-Purush (great national leaders)’ and they also abided by Dharma. We pray for welfare of the nation even when we are washing holy feet of our Deities. There is prayer for ‘Earth being like one nation’, in the ‘Mantrapushpanjali’ recited by us. All ‘Mantras’ taught to us have prayer for welfare of the Universe; therefore, establishing Hindu Rashtra will lead to not just the well-being of nation but also the well-being of the world’, stated Shri. Parag Bind of HJS while addressing Hindu Rashtra-jagruti Sabha held at Shriram Mandir’s hall at Borgaon (Meghe) on 18th January 2020.

Khed : ‘Hindu Rashtra-jagruti Sabha (sabha)’ organized by Hindu Janajagruti Samiti (HJS) is not just a public meeting but it is a unique drive undertaken to unite Hindus from all over India. Topic of establishing Hindu Rashtra is constantly discussed in these meetings. It is also like a part of freedom-fight. Our next generation will think of Hindu Rashtra if our generation makes sacrifices for establishing the same; therefore, now, the only goal should be Hindu Rashtra!, said Sadguru (Kum.) Swati Khadye, ‘Dharmapracharak’ of Sanatan Sanstha.

On 19th January, HJS held the ‘sabha’ at ST depot’s Golibar Maidan which was addressed by her. Shri. Manoj Khadye, HJS-Coordinator for Gujarat, Western Maharashtra and Konkan region and advocate (Sou.) Aparna Kulkarni of ‘Ranaragini’ Division shared the dais with her. The ‘sabha’ was attended by 3500 devout Hindus.

The ‘sabha’ was started with blowing of conch by Shri. Dnyanadev Patil, a seeker of Sanatan Sanstha; followed by lighting of lamp by Sanatan’s Sadguru Satyawan Kadam and Sadguru (Kum.) Swati Khadye. Shri. Manoj Khadye garlanded the statue of Chhatrapati Shivaji Maharaj kept on the stage. ‘Veda-mantras’ were recited. ‘Vedamurty’ viz. Shri. Pravin Vaidya, Shri. Vinayak Joshi and Shri. Yogesh Joshi were felicitated by Shri. Shashikant Ghanekar of HJS. Shri. Omkar Jarali and his team of HJS presented self-defence demos during the ‘sabha’.

Shri. Chetan Gadi said during the ‘sabha’ held on 7th December 2019 at Mankondur in Karimnagar district, “A priest from a temple in a city near Karimnagar asked to reduce volume of hooter sounded in a nearby mosque, due to which one fanatic Muslim attacked that priest. The priest died in the attack but this Government relieved the fanatic branding him as a madman. Is this supposed to be secularism? Hindus will get justice only in Hindu Rashtra; therefore, all Hindus should unite for establishing Hindu Rashtra.”

The ‘sabha’ held on 22nd December at Lingapet received good response of Hindus. All preparations were made for this ‘sabha’ by local devout Hindus and its advertisement was done through social media and meetings.

Echo of Hindu unity resonates in parts of Mumbai and Navi Mumbai !

Mumbai : Hindus are facing serious problems like conversions, love jihad, land jihad, idol-damaging etc and fanatics are united in strongly opposing to decisions taken by the Government in the interest of nation and Dharma. Majority population of Hindus would soon become minority if such things continue to happen. Hindu Janajagruti Samiti (HJS) has been therefore, holding Hindu ‘Rashtra-jagruti Sabha’ all over the country for guiding Hindus and motivating them to take active part in the mission of establishing Hindu Rashtra. On 5th January, such ‘sabha’ was held at Parel and Mulund in Mumbai and at Vashi in Navi Mumbai and on 4th January, it was held at Turbhe. Good response was received from devout Hindus to these ‘sabhas’. The ‘sabhas’ were started with blowing of conch, reciting of ‘Veda-mantras’ and ‘Shri Ganesh-shloka’ and were concluded with recitation of ‘shloka’ viz. ‘Sarvetra Sukhinah Santu…’. VCD explaining various activities of HJS was also shown during the ‘sabhas’.

Raigad : This country is presently going through transition period. Article 370 has been removed, ‘Rama-janma-bhoomi’ has been released and brainstorming is going on introduction of Citizenship Amendment Act (CAA) and National Register of Citizens (NRC) amongst people of this country. It was a crime to even utter the words ‘Hindu Rashtra’ till few years ago but discussions on Hindu Rashtra are held all over the country these days, stated Dr. Uday Dhuri of Hindu Janajagruti Samiti (HJS) while addressing participating devout Hindus during ‘One-speaker’ Hindu Rashtra-jagruti Sabha held by HJS on 5th January at Kharavali.

Shri. Alhad Malgaonkar did compeering of the ‘sabha’. The ‘sabha’ was graced by H.B.P. Vithoba Shinde with his presence. He was welcomed by Shri. Sudesh Palshetkar of HJS. The other dignitaries present were Sarpanch Sou. Swati Vitthal Mahamunikar of Kharavali Gram-Panchayat, its former Sarpanch Shri. Dhondiram Kalaskar and Shri. Suresh Kalamkar, Shiv Sena – Shakha-Chief.

1. Shri. Dhondiram Kalaskar, former ‘Sarpanch’ helped in advertising of the ‘sabha’ and in arranging meetings of HJS activists with local dignitaries.

Panvel, 8th January – HJS organized Hindu ‘Rashtra-jagruti Sabha’ at Shri Datta Mandir of Ambivali on 4th January. The ‘sabha’ was started with recitation of ‘Veda-mantras’. Shri. Yogesh Thakur of HJS gave guidance on the subjects like protection of nation and Dharma. Shri. Milind Poshe did compeering of the ‘sabha’.

2. Shri. Vasudev Gavate made arrangements for providing water to participants for free.

Hindu Rashtra-jagruti Sabha was held at Hanuman Mandir, on 4th January. Dr. (Sou.) Mamata Desai of HJS explained the importance of chanting ‘Kul-devata’s name and of ‘Shri Gurudev Datta’. She also spoke about need for having control over evil tendencies in social, health and education fields; need for making efforts with unity, in lawful manner. The ‘sabha’ was compeered by Shri. Manish Mali.

Kiwale (Dist. Pune) : Hindus need to become physically, mentally and spiritually competent to face attacks on Hindu Dharma carried out through different media like ‘love jihad’, government taking over management of temples, conversions etc. Hindus must have ‘Dharmashikshan’ and take active part in protection of Dharma. Hindus by birth may try to become Hindus through action, was the appeal made by Shri. Hemant Manerikar of Hindu Janajagruti Samiti (HJS) during Hindu Rashtra-jagruti Sabha held at Bhairavnath Mandir. More than 100 devout Hindus attended the ‘sabha’. Shri. Manerikar explained in detail about various attacks on Hindu Dharma while underlining the importance of unification of Hindus and undertaking spiritual practice.

The ‘sabha’ was started with blowing of conch and recitation of ‘Veda-mantras’. Shri. Ganesh Parade, a local devout Hindu welcomed Shri. Hemant Manerikar. The program was compeered by Shri. Jayesh Borase. Exhibition of Sanatan’s books and ‘sattvika’ products was held at the venue; besides pictorial exhibition on life-history of revolutionaries. Local residents of Kiwale offered hall of Shri Bhairavnath Temple for the ‘sabha’.

Many local young men had discussions with Shri. Manerikar, after the ‘sabha’. They showed interest in devoting time for ‘Dharma-seva’ and made a resolve to join ‘Dharma-seva’ through social media.