Representation submitted by HJS to the President 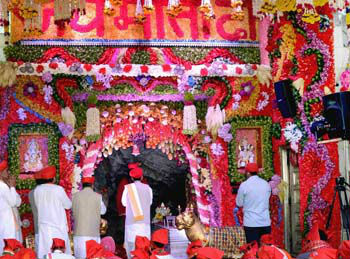 Mumbai : ‘Aarti’ is performed near the ancient cave of Shri Mata Vaishnodevi every morning and evening. Devotees from all over India participate in this ‘aarti’. ‘Shri Mata Vaishnodevi Shrine Board’ has been charging Rs. 1000/- per person for participating in this ‘aarti’ so far; but henceforth, this rate is going to be increased to Rs. 2000/- per person as per the announcement made by the Board recently. Millions of devotees visit this shrine. Instead of providing facilities to devotees, it has been observed even in earlier cases that the Government levied surcharge on Hindus visiting the temple in large number. Such decision is like purposely imposing restrictions on Hindus’ religious rights and it is quite infuriating. Such hike in cost should be cancelled and Hindus should be allowed to perform ‘aarti’ free of cost. ‘Shri Mata Vaishnodevi Shrine Board’ should be dissolved and an Administrator should be appointed, was the demand made by Hindu Janajagruti Samiti (HJS) through a representation to the President.

It has been stated in the representation that ‘Shri Mata Vaishnodevi Shrine Board’ has collected huge donations from devotees. Even then, the Board is collecting money which is, in a way, hideous manner of picking pockets of Hindu devotees. Recently, ‘Kumbh-Mela’ was held at Prayag (Uttar Pradesh). The Raliway Administration had decided to levy surcharge on devotees travelling by train to Prayag for ‘Kumbh-Mela’; but that hike in rate was withdrawn due to opposition by Hindus. All Devi-devotees and devout Hindus have therefore, made a demand for conducting in-depth study of this issue and even other issues where such monetary looting has been observed so that it would be stopped immediately.