All Saints should come together for establishing Hindu Rashtra ! – Sadguru (Dr.) Charudatta Pingale

Prayagraj : Hindus are not given any respect at Constitutional level in this country under the existing secular democratic system. Under article 28 and 29, there is provision for imparting religious education to minority communities; but there is no provision for imparting knowledge of ‘Sanatan Vedic Dharma’. There is Minority Commission to stop their oppression; but there is no Commission for Hindus forming majority population. If such discrimination is to be removed, word ‘secular’ should be removed from Indian Constitution. When this word ‘secular’ is removed, Bharat will become Hindu Rashtra. Then, it will be possible to protect all revered things like cow, Ganga, temples etc in Bharat. All Saints and devout Hindu activists need to come together for the same, stated Sadguru (Dr.) Charudatta Pingale, national Guide of Hindu Janajagruti Samiti (HJS). 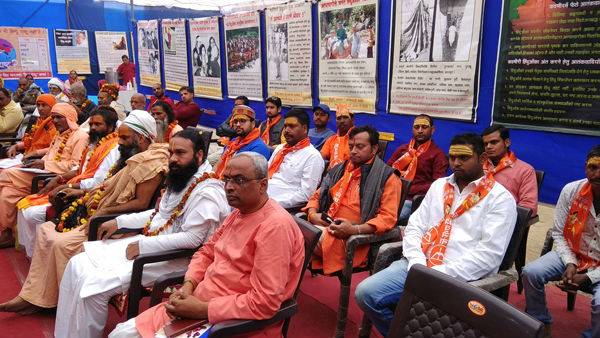 2. Displaced 7.5 lakh Hindus from Kashmir valley should be rehabilitated with full security in Kashmir. Union Government should create a territory for them in the name of ‘Panun Kashmir’.

3. Law should be passed by Union Government for protection of revered things like ‘Goumata’, Ganga, pilgrimage places etc of Hindus.

5. In the ongoing session of Parliament, the Union Government should issue an ordinance for construction of huge Ram-Mandir on ‘Ram Janmabhoomi’, paying due respect to Hindus’ religious sentiments.

Highlights of the Convention

1. Saints commended Sanatan Sanstha and HJS for organizing Convention on the issue of Hindu Rashtra

2. Confluence of Saints from all Sects like ‘Shaiva’, ‘Vaishnava’ and regions thro’ Convention

In one-day Convention held for the mission of establishing Hindu Rashtra, Saints-Mahants, Sadhus from ‘Shaiva’, ‘Vaishnava’ and other Sects, so also various regions participated in large number; similar to the ‘Triveni-sangam’ of Rivers Ganga, Yamuna and Saraswati at this place. Sanatan Sanstha and HJS brought Saints on the same platform irrespective of their Sects and regions; for which all Saints expressed their satisfaction and bestowed blessings over Sanatan and HJS for future activities; including establishing Hindu Rashtra.

3. First Convention during ‘Kumbh Mela’ of political parties of all ideologies !

One-day Convention for establishing Hindu Rashtra was successfully held in ‘Kumbh-Mela’ by Sanatan Sanstha and HJS which was all-encompassing ideologies of all political parties.

Participating Saints and other dignitaries