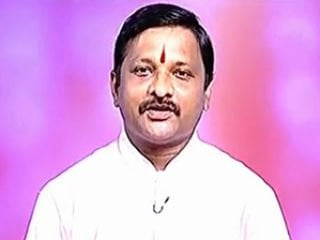 Mumbai : A petition was filed by a person named Janardan Mool in Court at Nagpur against burning Ravana’s effigy. The Court had made a remark on this petition that it was a wrong and insignificant petition and it was filed only to get publicity. The Court had also asked whether such petitions were filed only to play with Hindus’ sentiments. The Court had, in fact, charged fine of Rs. 25,000/- to the petitioner. It is totally incorrect to make such demand from legal viewpoint. Even then, organization like ‘Bhim Army’ is making such demand which is meaningless. Tradition of burning Ravana’s effigy has been followed for many years and it would not be stopped under any circumstances, stated Shri. Satish Kocharekar, spokesperson of Hindu Janajagruti Samiti (HJS) during debate held on ‘Jai Maharashtra’ channel on the subject ‘Bhim Army’s demand for inclusion of subject on Ravan in curriculum; opposition to burn Ravana’s effigy on the day of Dasara’. Shri. Vishal Patil hosted the program. Shri. Satish Kocharekar, spokesperson of HJS and Shri. Sunil Thorat, General Secretary of ‘Bhim Army’ participated in the program.

1. Ravana used to misbehave with women. Symbolic burning of such reprehensible king is carried out and it will be done even in future.

2. It seems that Bhim Army has objection to the Constitution of this country. This organization has been set up in the name of Babasaheb Ambedkar who has conferred right to every citizen of this country, to follow own religion.

3. It is very wrong to glorify Ravana. It is incorrect to call such person as ‘Mahatma’ who destroyed his own dynasty.

Footnotes like ‘Ravana is not a villain’, ‘Ravana, a valiant and principled king’, ‘Lankapati Ravana, Kuldevata of tribal community’, ‘Ravana a ‘Dashagranthi’ Brahmin’, ‘Ravana set up his kingdom on his own strength’ etc were shown  during the entire program. (Will such news channel glorifying Ravana, be able to work in the interest of people ? – Editor, Dainik Sanatan Prabhat)

There is a story of Ravana abducting Seeta to teach a lesson to Lakshman; but he never molested or insulted her. (Ravana was cursed; therefore, he didn’t touch Seetamata. There are many references in Ramayana, of Ravana oppressing women. – Editor, Dainik Sanatan Prabhat) Rama slew Ravana because he abducted Seeta. Ravana had ten heads. He was a demon. Such portrayal of Ravana is created and he is considered as a villain. His effigy is burnt. We, on behalf of Bhim Army, oppose to such depiction. We are also going to perform ‘puja’ of Ravana on the day of Dasara because he was a great soul.

1. Ravana is worshipped in Madhya Pradesh, Jharkhand, Chhattigad, Sri Lanka and Amravati in Maharashtra since last 12 years. If he was bad, he wouldn’t have been worshipped. Ravana is ancestor of tribal community and is a valiant super hero, brave warrior; therefore, he is worshipped. We pay him respect and homage.

2. Ravana was a highly learned person. He was ‘Dashagranthi’ Brahmin. ‘Mond Adivasi’ community also worships Ravana as a hero who fought to save our culture during cultural clashes.

3. ‘Mahatma’ Ravana was a prosperous king. He was a sculptor and a just king. He has been misrepresented. He is shown to have ten heads which has created abhorrence towards him amongst people.

(It is the example of ill-effects of distortion of history. Today, there are people who glorify Ravana against Prabhu Shriramchandra. It is a failure of democracy ! – Editor, Dainik Sanatan Prabhat)

Firm assertion by Satish Kocharekar : It is right to burn effigy of Ravana as a symbol of evilness !

Ravana was a son of Sage Vishwa and Kaikesi and was a ‘Dashagranthi’ Brahmin. He had knowledge of Sanskrit language. ‘Saam Veda’ was read after his death. These are all virtuous things but he oppressed women and ill-treated them. This truth should also be put forth. What I feel is not important but burning effigy of Ravana as a symbol of evilness is right thing to do. The Court has also said that these people had no right to talk on Hindu Dharma and interfere in Dharma matters. Hindus should abide by their Dharma in proper manner and with fervor. Tomorrow, there will be demand even to include information on Dawood and Hafiz Saeed in curriculum; because they were helping people of Pakistan. Even then, the truth about their attacking India cannot be hidden.