Only 22 prosecution cases of sound-pollution against the year-round loudspeakers on mosques, while 230 cases during Hindu festivals ! 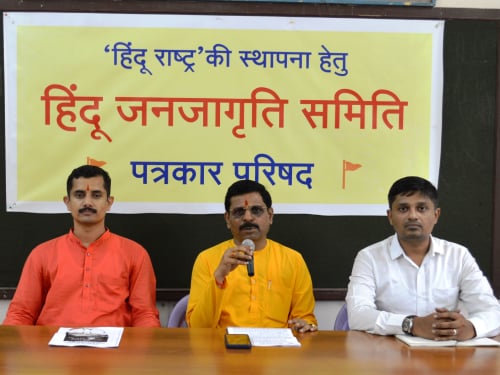 The Pollution Control Board has so far published many reports on how much sound pollution is caused during Hindu festivals; however, not a single report of sound pollution caused by the loudspeakers on the mosques and that caused during other Muslim festivals has been published by the Board. This simply amounts to religious prejudice by the Government against Hindus. Hindu Janajagruti Samiti (HJS) strongly condemns this religious prejudice by the Secular Government and Maharashtra Pollution Control Board. During the 7 years from 2015 to 2021, the Pollution Control Board filed 230 prosecution cases on the organisations that celebrate Dahi-handi, Ganeshotsav and Navaratrotsav; however, during the same period, only 22 prosecution cases have been filed against Muslims. This has been revealed through the RTI. The Maharashtra Pollution Control Board has thus defamed Hindus through their prejudiced action; hence, all the associated office bearers of the said Board be suspended. This demand was made by Mr Manoj Khadye, Hindu Janajagruti Samiti’s coordinator for the Konkan region and west Maharashtra and the State of Gujarat.  He was speaking on behalf of Hindu Janajagruti Samiti during the Press Conference held at Mumbai Patrakar Sangh. Mr. Sagar Chopdar, Hindu Janajagruti Samiti’s Mumbai coordinator and Mr. Abhishek Murukute of ‘Surjaya Abhiyan’ were also present during the Conference.

Mr. Khadye further added that he obtained information through RTI that a total of 252 prosecution cases of sound pollution have been filed in Maharashtra during the past 7 years. Of these, 230 cases have been on the organisations that celebrate Dahi-handi, Ganeshotsav and Navaratrotsav or their activists. There is sound pollution five times a day every single day, through the loudspeakers on the mosques and the citizens from Maharashtra as well as the entire Nation have expressed strong disapproval of this nuisance; however, the Maharashtra Pollution Control Board has conveniently ignored this sound pollution.

During the Ganeshotsav, Diwali the Pollution Control Board measures the level of pollution caused in 290 venues in 27 Districts with the help of sound level measuring devices. Similarly, it also measures the extent of air and water pollution. The readings of sound and air pollution are recorded every hour in the entire State during the Diwali festival. A studious report of these readings is made every year and uploaded on the Board’s website. Such reports are available from the year 2015; if the Government is Secular, why does it not take the readings of sound pollution caused by the loudspeakers on the mosques every day throughout the year? Why does it not make and upload these reports? Recently, when Mr Raj Thackeray protested against the loudspeakers on the mosques, there was the news that over 843 loudspeakers on the mosques around Mumbai were granted permission. This means that they were illegal till then. If that is the case why had the Pollution Control Board not taken action against them? Mr. Khadye also demanded that the officers responsible for such religious prejudice should be immediately suspended from the service and that this issue should be thoroughly investigated.