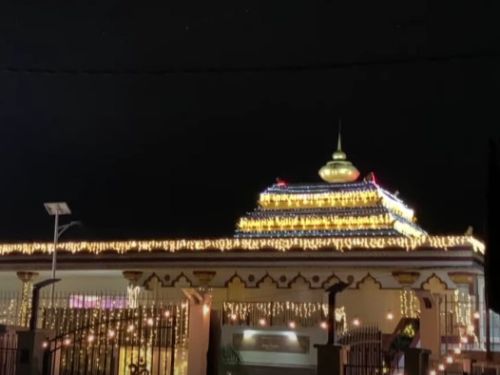 On Tuesday, a magnificent Hindu temple was inaugurated in Antananarivo, the capital city of Madagascar, a vast island in the Indian Ocean with a population of over 26 million people. The occasion was attended by Abhay Kumar, the Indian ambassador to Madagascar and Comoros.

Devotees flocked to the temple’s inaugural event, which included the unveiling of sculptures of several Hindu deities, aarti, and the singing of devotional songs. Sanjeev Hematlal, president of the Hindu Samaj, spoke on the occasion, saying that the opening of the majestic temple is a source of great pride for the Hindu community in Madagascar.

The freshly constructed temple is Antananarivo’s first Hindu temple. The long-awaited temple by Madagascar’s Hindu diaspora was under construction for a long time. Earlier, in Antananarivo, a magnificent Hindu temple hall was also opened on the occasion of Navratri in 2020. Over 20,000 individuals of Indian origin, primarily from Gujarat, are settled in Madagascar.

The Gujarati diaspora in Madagascar is widely dispersed. Many of them practise Hinduism, and the Hindu Samaj has constructed a beautiful Hindu temple in Antananarivo for the first time. Small Hindu temples may be found in Madagascar’s other main cities, including Mahajunga and Antsiranana.

Indians, particularly those from Gujarat, arrived in Madagascar in small boats in the late 18th century to partake in Indian Ocean region commerce. Since then, they have significantly aided the expansion of trade and business both inside Madagascar and between India and Madagascar.

India is Madagascar’s major trading partner, with two-way commerce expected to reach 400 million USD in 2020–21. The two Indian Ocean neighbours’ partnerships are expanding in many areas. The two nations have healthy and strong connections that are deepening, and multiple MoUs in crucial sectors such as health, education, culture, information, and travel have been inked.