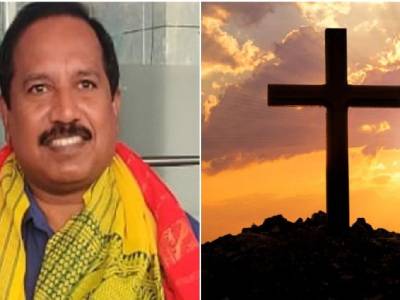 On Thursday, a Delhi court ordered Indian Medical Association (IMA) President John Rose Austin Jayalal to not use the organisation’s platform to propagate any religion.

According to reports, the Delhi Court cautioned the controversial IMA President Jayalal, who is accused of exploiting the Covid-19 pandemic to convert patients into Christianity, against making any loose comments against the community.

“The word Hindi in this couplet, written by a Muslim poet, does not refer to Hindus but is referred to all Hindustanis, irrespective of caste, colour and religion, which is the beauty of secularism,” the court noted.

Pulling up the IMA chief for his comments, the district judge said, “Any kind of unguarded or loose comment cannot be expected from someone chairing the responsible post. IMA is a prestigious institution…such a platform cannot be used to propagate an individual’s views on any religion”.

Do not indulge in activity contrary to principles of Constitution of India: Court to IMA Chief

The judge also asked the IMA chief not to indulge in any activity contrary to the principles enshrined in the Constitution of India and maintain the dignity of the position chaired by him.

“He shall not use the platform of IMA for propagating any religion and rather shall concentrate for the welfare of the medical fraternity and progress in the medical field,” the Additional District Judge said.

The court was hearing a plea filed by a petitioner named Rohit Jha against John Rose Austin Jayalal, the controversial president of the equally controversial organisation Indian Medical Association (IMA), for abusing his power and resorting to proselytization during the pandemic.

In his plea, Rohit Jha had stated that Jayalal is taking the umbrage of the Indian Medical Association (IMA), misusing his position and misleading the nation and its citizens in order to convert Hindu to the Christian religion. Citing controversial articles and interviews of the IMA president, Jha sought direction from the court to restrain him from writing, speaking in media, or publishing any content which is defamatory to Hindu religion or Ayurveda.

Rohit Jha added, “Even in the criticism of Ayurveda, the defendant does not lag behind. He alleged that the Modi government believes in Ayurveda because of its cultural values and traditional belief in Hindutva. He claimed that for the last three-four years, efforts are being made to replace Ayurveda with modern medicine.”

Dr Jayalal submitted he was not against ayurveda but against “mixopathy”.

The court noted that the suit was an offshoot of the latest “Allopathy vs Ayurveda” controversy and said that no injunction is required based on the assurance given by the Jayalal that he will not indulge in such kind of activity.

Earlier, the legal activist group Legal Rights Protection Forum had filed a complaint with the Ministry of Home Affairs against John Rose Austin Jayalal, seeking action against him for abusing his power and resorting to proselytisation during the pandemic.

In its complaint, the LRPF sought revocation of Medical Practitioner’s License of IMA President John Jayalal, alleging that the controversial doctor has openly declared his intention of splitting human beings into Christians and non-Christians and converting the latter to Christianity using every available opportunity.

The legal-activist group asked the government to stop all funds to IMA until John Jayalal is removed from his position as President. Dr Johnrose Austin Jayalal was appointed as the national president of the Indian Medical Association (IMA) for the year 2020-2021 at its 95th annual national conference held in December 2020.

In its complaint, the LRPF has pointed out two interviews given by Jayalal where he had expressed strong views about proselytising Hindus. The complaint mentions Jayalal’s interview with Haggai International, where he says that the “Hindu Nationalist government” wants to destroy modern medicine.

He had also that he is converting Covid-19 patients to Christianity. He had said, “the urgent need of the proclamation of the Gospel to people who are suffering from the virus has allowed us to share the Gospel even in secular institutions.”

In another interview to Christianity Today, Jayalal had said that it was the Church that took care of the poor people, implying that the government did not do anything. He had said that despite the hardships, difficulties, and restrictions that came in the wake of the pandemic, Christianity was growing.