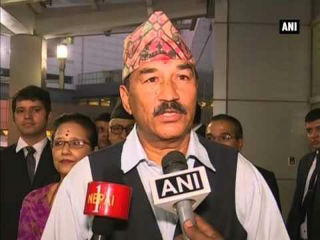 Former Deputy Prime Minister of Nepal, Kamal Thapa, reiterated his demand for the government to abdicate the ‘secular’ tag and restore the country’s Hindu identity on the Himalayan country’s Constitution Day on the 19th of September, reports Hindi Daily Jagran.

The long-pending demand for the restoration of Nepal’s earlier status as a Hindu state, which the Rastriya Prajatantra Party, led by Kamal Thapa has been putting forward in front of Nepal’s Communist Party-led government time and again, gained momentum amidst the escalated tensions between India and Nepal over the border issue.

Kamal Thapa tweeted that Nepal should be declared a Hindu republic in view of the larger interests of the nation. His party workers are also raising this demand by running a signature campaign. Jitendra Kumar, secretary of the World Hindu Council of Nepal, opined that about 82 per cent of Nepal’s population is Hindu. The original nature of Nepal has been tampered with by snatching the status of Hindu nation. Hence he said that it is the collective demand of the people of the country that the status of Hindu nation is restored.

Kamal Thapa said that people of Nepal are hopeful that Indian Prime Minister Narendra Modi and Hindutvavadi CM of Uttar Pradesh Yogi Adityanath would cooperate and help them to attain complete religious freedom by revoking the provision of secularism and reinstating Nepal’s Hindu identity.

Last year too, the Rastriya Prajatantra Party, which has been in continuous pursual, in a memorandum handed to Prime Minister K P Oli demanded that Nepal should be declared a Hindu state. Nepal was declared a secular state in 2008 after the success of the communist movement of 2006 that saw the abolition of the monarchy.

Hinduism is the largest religion in Nepal. Abolition of the monarchy in the erstwhile Himalayan kingdom had led to evangelical Christian missionaries flooding the country and converting poor and vulnerable Hindus to Christianity. This alarming shift in the country’s demographic profile had triggered calls for jettisoning secularism that has facilitated and encouraged rampant proselytism by Christian missionaries and restoration of the country’s Hindu identity.

Christian evangelicals have targeted the Dalits and marginalised communities like the Tharus in Nepal. They have lured them into Christianity by not only offering free education in missionary institutions,but also money and other material benefits. Another preferred method of conversions is through miracles and faith-healing which many people unwittingly fall prey to.