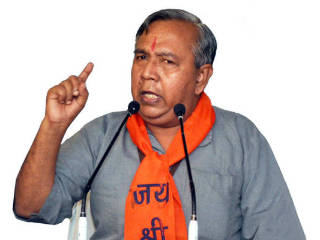 Tapan Ghosh, pro Hindu personality in West Bengal, died of Coronavirus today evening. Ghosh was admitted at a private hospital in Mukundapur in Kolkata in 28 June after testing positive for Coronavirus. He had existing lungs problem, and his oxygen level in the body had declined. Tapan Da will always be remembered as a hindu warrior.

HJS condoles the untimely demise of Shri. Tapan Ghosh da, a fierce Hindu leader, a pillar of support for the Hindus of West Bengal.

Rajya Sabha MP Swapan Dasgupta tweeted to inform the death of Tapan Ghosh. “He was one of the most dedicated soldiers fighting for Hindu unity and sangathan in West Bengal. He gave his live to this cause, inspiring thousands through personal example. He will always be remembered and provide constant inspiration,” he wrote.

Tapan Ghosh died this evening. He was one of the most dedicated soldiers fighting for Hindu unity and sangathan in West Bengal. He gave his live to this cause, inspiring thousands through personal example. He will always be remembered and provide constant inspiration. Om Shanti

Tapan Ghosh was a pracharak of Rashtriya Swayamsevak Sangh in West Bengal, but he had left RSS over differences over the way of functioning of the organisation. He established Hindu Samhati in 2007, a Hindu nationalist organisation with a goal to protect Bengali Hindus. He had joined the RSS in 1975.

The organisation has its presence in every district of West Bengal, and has also started making inroads in Assam and Jharkhand. Tapan Ghosh had established in accusing the RSS and VHP of having a soft approach, and had aggressively campaigned for rights on Hindus in the state.

In 2018, Ghosh left Hindu Samhiti unhappy with the way it was functioning. He said that he wanted to disband the organisation. He wanted to keep the organisation apolitical, and was not happy to see his leaders getting involved with political matters. “I have urged Hindu Samhati workers to disband it. We did not want to get involved in politics because politics tends to divide Hindus on socio-economic lines,” he had said.