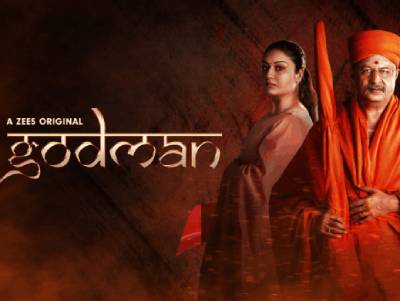 Recently, Zee5-an Indian video on service demand run by Essel Group through its subsidiary Zee Media Corporation found itself in hot water after it launched a controversial trailer of a soon-to-be aired web series ‘Godman’.

The web series featuring actors Sonia Agarwal, Daniel Balaji and Jayaprakash, is directed by Babu Yogeswaran and produced by Ilango Raghupati. It is slated to be premiered on Zee5 on June 12. However, the teaser of the web series, which was released a short while ago, has already stirred up some serious controversy.

The teaser, which is laced with liberal doses of explicit content and abusive dialogues, touched off a massive controversy after several Hindu organisations and users voiced their protest against the web series, claiming that the series aims to cast Brahmins and Hindu saints in a bad light. The trailer of the web series featured Jayaprakash as a Hindu saint, who is seen making crass remarks against the Brahmins.

Signature Campaign : Appeal to set up a regulatory authority for Web Series !

Teaser of Godman draws criticism for being patently anti-Hindu

Facing intense criticism for the contentious teaser, makers quietly marked the original trailer as ‘private’ and re-released a new trailer after muting a few dialogues. Nevertheless, oodles of Hindu organisations voiced their protest against the airing of the web series. The Thamizhnadu Brahmin Association wrote a letter to the Chief Minister’s Cell seeking the trailer to be banned. Jayam JSK Gopi of Hindu Religious Party, while talking to News Today claimed that the web series was a blatant attempt to demean the faith of Hindus. “We are not soft targets. Complaints will be lodged in appropriate legal forums,” he thundered.

A temple priest in Nanganallur, Balaji, said that the trailer has hurt the sentiments of Hindus. He called upon Hindus to unite and stop the incessant ridicule that they are ceaselessly subjected to. “All are equal before God. But to repeatedly make fun of us in cinema and small screen should be stopped. There should be unity among all of us to fight this,” he said.

The trailer also faced a severe backlash on social media where viewers slammed the makers for besmirching Hindus with their anti-Hindu content and asked the Zee5 organisation from Girish Bhardwaj, Vishwa Hindu Parishad member, took to Twitter to express his strong objection to the ‘Godman’ web series. Attaching the poster, Bhardwaj claimed that the poster of the tendentious series was an unambiguous indicator of how intensely Hinduphobic it would be.

“Are we Hindu’s soft target of the Entertainment industries? Yet again another series is about to release which is totally an Anti Hindu #GodMan the poster itself clearly intensifies it as HinduPhobic Series! #BanGodMan @PrakashJavdekar” Bhardwaj tweeted.

Are we Hindu’s soft target of the Entertainment industries?
Yet again another series is about to release which is totally an Anti Hindu #GodMan the poster itself crearly intensifies it as HinduPhobic Series!#BanGodMan @PrakashJavdekar pic.twitter.com/FAD1E8L6HC

BJP national secretary H Raja also took to Twitter to express his displeasure with the voyeuristic content showed in the Godman trailer. Sharing a poster of Godman, he said, “Using OTT platforms, the TV channels are promoting voyeuristic content, which might affect children who watch those series at home. It is highly condemnable and it brings forth the important point that OTT content should also be subjected to censorship,” he tweeted.

Several other Twitter users also panned the trailer of Godman, claiming that the teaser expressly spreads hatred against Brahmins and Hindus with calls for banning of the series as well as the boycott of Zee5 Tamil, the over-the-top(OTT) service provider on which Godman is set to be released.

Another Hinduphobia @ZEE5Tamil #Godman
What's the motive of this teaser: Divide Hindus by showing brahmins in poor light? @EsselGroup_@subhashchandra

With all those vulgar scenes and abusing brahmins, is this show a dirty game of Missionaries?
Check thread of pics:

While a groundswell of opposition is brewing against the Godman online as well as offline, the official Twitter account of Zee5 support chose to ignore the criticism received by the controversial series and instead appeared to brazen out the show’s vexed storyline.

When one of the Twitter users replied that Hindus should not watch the series and cancel the subscription of Zee5, the Zee5 Support shot back saying that the series is not against any specific community, caste or religion, adding that the content showcased is in the interest of the public at large which would keep people well-informed and aware about all aspects across the society.

ZEE5’s latest Tamil fiction show – GODMAN, is not against any specific community, caste or religion. On the contrary, the content showcased is in the interest of the public at large, in order to keep them well-informed and aware about all aspects across the society. (1/2)

Adv. Ishkaran Bhandari claims Zee not to air this show after intervention by Dr. Swamy

As per Advocate Ishkaran Singh Bhandari, Dr. Subramanian Swamy intervened in this issue and talked with Shri. Subhash Chandra of Zee Entertainment (owner of Zee5). Accordingly series has been withdrawn.

Great News-
Dr @Swamy39 was approached by Kanchi Mutt do something as the series “Godman” is fully anti-Hindu & was to be aired on some Zee channel!

Dr Swamy Talked to Mr Subhas Chandra & recommended that series not be shown.

It has been withdrawn & wont be aired.

Of late, the over the top (OTT) service providers in India have long been accused of glorifying Hinduphobia and providing space for anti-Hindu content. Earlier, other OTT service providers such as Amazon Prime, Netflix have also been accused of pandering to anti_hindu bashing. Recently, Amazon Prime was accused of providing its platform for a Hinduphobic series-Pataal Lok. Likewise, Netflix, the US-based online streaming service, was also criticised for exhibiting deep-rooted Hinduphobia for hosting anti-Hindu series such as ‘Sacred Games’, ‘Laila’ and ‘ghoul’.