Statue of Chhatrapati Shivaji Maharaj, the Founder of ‘Hindavi Swaraj’ was kept on stage and it was garlanded by the dignitaries, seeking his blessings.

Homage paid to Hindus killed during recent riots at Delhi

All Hindus attending the ‘sabha’, first paid homage to innocent Hindus who were killed in recent riots staged at Delhi and prayed for their smooth post-death journey. They also chanted Shri Gurudev Datta as per Hindu culture for the departed souls. 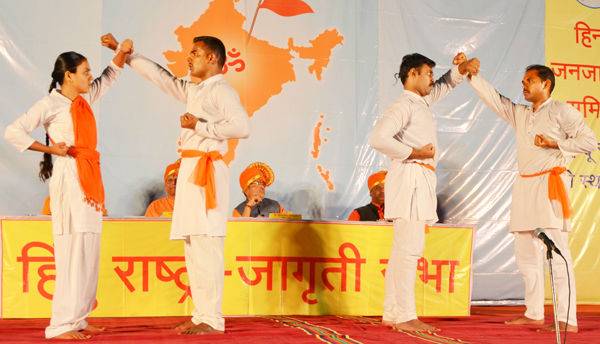 In view of the increasing oppression of women in the society, the HJS representatives presented demonstrations of self-defense so that everyone can protect themselves. Seeing these demonstrations, the devote Hindus present at the meeting demanded the introduction of self defense classes in their area.

Nagar, 16th March – There is Minority Commission to seek redress in case some incident takes place which is against minority population of this country. There is Minority Development Department for their development with the Government; however, Hindus, though in majority, have no such protection anywhere either through any Majority Commission or Department with Government for their development. Hindu Rashtra is therefore, needed for Hindus to get equal treatment, stated Kum. Pratiskha Korgaonkar while addressing Hindu Rashtra-jagruiti Sabha held by Hindu Janajagruti Samiti at Vitthal Mandir in Panchvati area. Shri. Rameshwar Bhukan of Sanatan Sanstha also addressed this sabha, attended by more than 80 devout Hindus. H.B.P. Dnyaneshwar Mauli Maharaj Shinde graced the occasion with his auspicious presence.

Hindu Janajagruti Samiti (HJS) held Hindu Rashtra-jagruti Sabha on the grounds of Shri Vitthal Mandir. Smt. Alka Vhanmare from Ranaragini Division of HJS said that our nation and Dharma is presently in danger. In every 15 minutes, a girl from this country is raped. Cows are slaughtered openly. Hindus need to wake up at least now and work for the mission of establishing Hindu Rashtra as per own capacity. We are Hindus; so, let us extend New Year greetings only on the day of Gudhi Padava. The sabha was attended by 180 men and women.

1. The large no. of women participating in the sabha at Khamgaon was drawing everyone’s attention.

2. Participating local residents made a demand for HJS conducting Dharmashikshan classes every week

Youth decide to come together once in every week for ‘Dharmakarya’

Jat (Dist. Sangli) : On 8th March, Hindu Rashtra-jagruti Sabha was held at Basavraj Mandir which was attended by about 100 ‘jidnyasus’. Shri. Santosh Desai of HJS addressed the ‘sabha’ which was compeered by Sau. Vinaya Chavan. Few youth members had discussions for about an hour after the ‘sabha’. They decided to meet at least once in a week for ‘Dharmakarya’. They also promised to take initiative in creating awareness amongst people towards boycotting products with ‘Halal’ certification.

Satara : Presently, so much politics is played with the issue of Citizenship Amendment Act (CAA). Fanatic Muslims are protesting by coming on roads and resorting to arson and riots against this law. Anti-India slogans are raised in Jawaharlal Nehru University (JNU). Hindus temples are taken over by the Government and facilities are provided to minorities. Consequences of agitations going on at Shaheen Baug in Delhi are seen all over India. Hindu Rashtra is required if fanatics are to be given apt reply, stated Shri. Mahendra Nikam of Hindu Janajagruti Samiti (HJS) while addressing ‘Hindu Rashtra-jagruti Sabha’ held by HJS on 1st March 2020 in the premises of Shri Veer Ganesh Mandir, Nagewadi (District Satara). Sou. Rupa Mahadik of Sanatan Sanstha shared the dais with him. They garlanded statue of Chhatrapati Shivaji Maharaj placed on the stage before starting the ‘sabha’. More than 100 devout Hindus from Nagewadi and nearby areas attended the ‘sabha’. Sou. Rupa Mahadik explained the need for spiritual practice for increasing inner strength.

Nandurbar : Hindu Janajagruti Samiti (HJS) held ‘Hindu Rashtra-jagruti Sabha’ at Shriram Chowk in Palashi and at Shri Ramdev Baba Mandir of Rajapur. Sanatan’s Sou. Nivedita Joshi, Dr. Narendra Patil and Dr. Satish Bagul of HJS addressed these ‘sabhas’. The ‘sabhas’ were started with blowing of conch. H.B.P. Ravindra Pathak Maharaj blessed these ‘sabhas’ with his presence. Lamp was lit by Sarpanch Pralhad Patel at Palashi and by Shri. Gorakhbhai Patel, President of Ramdev Baba Mandir at Rajapur. Statue of Chhatrapati Shivaji Maharaj placed on stage was garlanded on the occasion.

Sou. Nivedita Joshi gave guidance on the topic of ‘Importance of Sadhana in life’; while Dr. Satish Bagul explained harm caused due to following western culture and benefits of following Hindu culture. Dr. Narendra Patil of HJS spoke on the topic of ‘Need of Hindu Rashtra’.