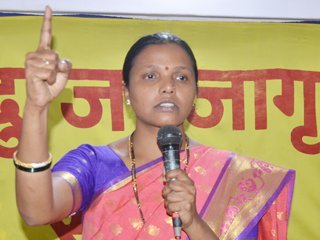 Bhiwandi (Dist. Thane) : This country is going through change. Article 370 has been removed, ‘Rama-janma-bhumi’ was released. Lot of brainstorming is going on amongst people on Citizenship Amendment Act (CAA) and National Register of Citizens (NRC). We observed how some people have been opposing to the law of giving citizenship of this country to aggrieved Hindus, Sikhs, Christians and Parsis from Afghanistan, Bangladesh and Pakistan. Opposition parties opposed to all these changes and claimed that Bharat was moving towards becoming a Hindu Rashtra. It was a crime to even utter the words Hindu Rashtra in the past. Today, issue of Hindu Rashtra is discussed everywhere. Awareness has been created towards issue of Hindu Rashtra not only amongst 15 lakh Hindus who have attended ‘Hindu Rashtra-jagruti Sabhas (sabhas)’ held all over the country so far but awareness has also been created among elected representatives of people and leaders sitting in Parliament which is the unique success of these ‘sabhas’, stated Dr. (Sou.) Deeksha Pendbhaje of Hindu Janajagruti Samiti (HJS) while addressing such ‘sabha’ held at the hall of Rajeshyam School in Bhandari Compound area. 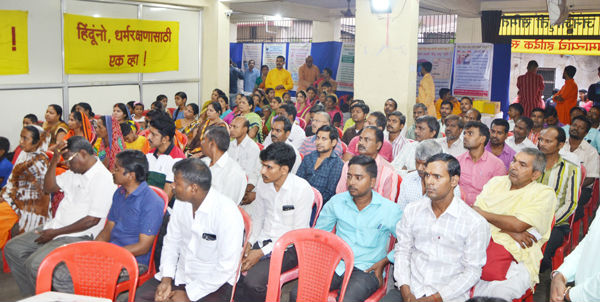 Participating devout Hindus had discussions with the speakers after the ‘sabha’, on making lawful efforts in preventing conversions. They decided to hold similar ‘sabha’ and create awareness amongst people on this issue.

We can be happy only when we abide by Dharma ! – Yogesh Thakur, HJS

Penn : Today’s young generation is falling prey to western customs and traditions. We are facing lot of distress due to emulating westerners in celebrating birthdays, festivals, in dressing up etc but we can be happy only when we abide by our own Dharma, stated Shri. Yogesh Joshi of HJS during ‘Hindu Rashtra-jagruti Sabha’ held at Savarsai village. The ‘sabha’ was started with prayer to ‘Gram-devata’ Shri Bhavanidevi. Shri Swami Balyogi Adbhutananda Maharaj and H.B.P. Krushna Maharaj graced the ‘sabha’ with their presence.

Highlight – Shri Swami Balyogi Adbhutananda Maharaj was present from the beginning of the ‘sabha’ and even after conclusion of the ‘sabha’ when participating devout Hindus had discussions with the speakers at the venue.

Future generations will be able to live with self-respect if we sacrifice for establishing Hindu Rashtra now ! – Sadguru (Kum.) Swati Khadye

Kharepatan (Dist. Sindhudurga) : After 2060, Muslims, who are in minority now, will become majority population. They will declare this nation as an Islamic country; therefore, we are demanding Hindu Rashtra now. Our ancestors made sacrifices for protection of our God, nation and Dharma; hence we are able to enjoy independence. If current generation makes sacrifices for Hindu Rashtra now, our future generations will be able to proudly live as Hindus in this world, stated Sanatan Sanstha’s ‘Dharmapracharak’ Sadguru (Kum.) Swati Khadye while addressing ‘Hindu Rashtra-jagruti Sabha (sabha)’ organized by Hindu Janajagruti Samiti (HJS) on the huge ground of Sheth Navinchandra Mafatlal Vidyalaya (Kharepatan High School) on 29th December 2019. It was the 81st such ‘sabha’ held in Sindhudurga district and it was attended by 5500 Hindus. The ‘sabha’ was started with blowing conch by Shri. Rajendra Parab; followed with lighting of lamp by Sanatan’s ‘Dharmapracaharaks’ viz. Sadguru (Kum.) Swati Khadye and Sadguru Satyawan Kadam. Shri. Manoj Khadye, HJS-Coordinator for Gujarat State, western Maharashtra and Konkan region garlanded statue of Chhatrapati Shivaji Maharaj. Advocate (Sou.) Kaveri Rane of ‘Ranaragini’ Division and Shri. Sumit Sagavekar, HJS- ‘Yuva-Sanghatak’ shared the dais with them. Later, ‘Purohits’ viz. Shri. Mandar Manerikar and Shri. Soumitra Padhye recited ‘Veda-mantras’, invoking divine energy. Brilliant speeches of dignitaries sowed the seed of the mission of establishing Hindu Rashtra amongst the participants.

New Year will be celebrated only on ‘Gudhi Padava’ !

Hindus’ New Year begins on the day of ‘Gudhi Padava’. Nature and even animals, birds indicate that change. Celebrating New Year on 31st December is like converting yourself for a day. So, take a vow that ‘We shall celebrate New Year only on Chaitra Shukla Pratipada’, was the appeal made by Shri. Sagavekar. The audience members raised their hands in support to his appeal.

Awakening of ‘Hindutva’ through Hindu Rashtra-jagruti Sabha held at Dhule !

Resolve made for the protection of ‘Hindutva’ through ‘Sabha’ held at Kolhapur !