Karimnagar (Telangana) : Hindus are not imparted education related to their Dharma matters; therefore, they follow western culture and such ‘sabhas’ have to be held for giving information on Hindu Dharma. We should therefore, pay gratitude to Hindu Janajagruti Samiti (HJS). Manu Maharshi has explained rules of Hindu Dharma in ‘Manu-smruti’. ‘Bharat-bhoomi’ is a holy land; therefore, even Deities wish to incarnate in this holy land of Bharat. We should remember these things and abide by Dharma, stated ‘Brahmashri Purana Vachaspati Shri. Maheshwar Sharma while addressing ‘Hindu Rashtra-jagruti Sabha (sabha)’ held on the ground of Arts College in Karimnagar district of Telangana by HJS. The ‘sabha’ was attended by 1200 devout Hindus. Shri. Bandi Sanjay, a staunch devout Hindu activist, Shri. Chetan Gadi, State Coordinator of HJS for Telangana and Andhra Pradesh shared the dais with Shri. Sharma. Sou. Vinuta Shetty of Sanatan Sanstha was also present.

Modi should take firm action for eliminating enemies within this country ! – Chetan Gadi

Prime Minister Narendra Modi’s giving free hand to our Army after Pulwama attack, for eliminating terrorists, was a good decision. Along with this, PM Modi should take firm action for eradicating enemies within this country is the demand by all Hindus through the medium of this ‘sabha’. A person like Owaisi, who had said that ‘we can show our power within 15 minutes’, is granted permission to hold public meetings; Kanhaiyakumar, who had said that ‘Bharat tere tukade honge…’, has freedom of speech; but permission is not granted to T. Rajasingh, who talks about undivided India and integrity of this country. Is this secularism? Hindus will get justice only in Hindu Rashtra. We have to therefore, unite and make a demand for Hindu Rashtra. 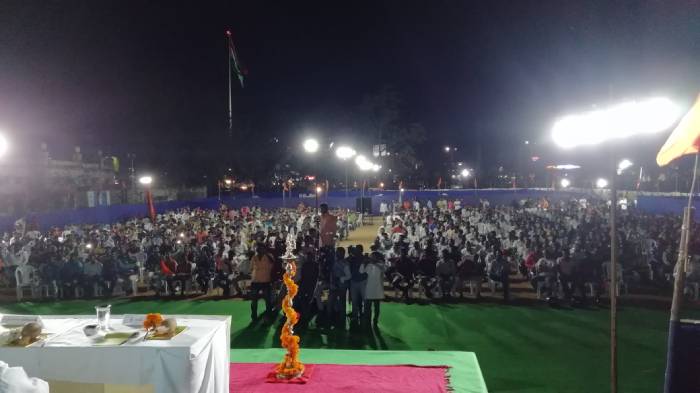 1. BJP MLA T Rajasigh was not granted permission to attend this ‘sabha’ as Chief Speaker; therefore, his message was heard in his own voice through his cell phone and it received good response from people. (Govt. banning devout Hindu activists in this manner, belongs to India or Pakistan ? – Editor, Dainik Sanatan Prabhat)

2. There was not even a day left after permission was given but local devout Hindus extended all help and preparations were over before time.

It shows that the checking was done not for preventing sabotage but for harassing devout Hindus !

Police had erected machinery for checking people going for ‘sabha’. Everyone had to go through this system before going to the venue. (Had police done checking of terrorists and their supporters in this manner, this country would have been freed of terrorism! People pelting stones at our soldiers in Kashmir are not arrested or such checking is never done for them; but please note that checking is done in case of devout Hindus who are going for ‘sabha’ organized for issues related to protection of nation and Dharma! – Editor, Dainik Sanatan Prabhat)