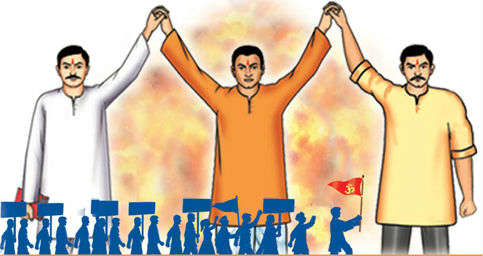 Kolhapur : The unauthorized construction in Shri Vitthal-Rukmini Mandir at Pandharpur has endangered the temple-structure. Shri Saibaba Sansthan at Shirdi has given contract of making ‘prasad laddus’ to a bogus company. How slab on the ancient Shri Vitthal temple was cast and improper constructions were erected at many places in the premises? How can a contract be given to a fake company by Shri Sai Sansthan for making ‘prasad’ ? Why the committee appointed by the Government didn’t realize these things or was it deliberately ignored? The corrupt and lethargic management as found in Government has percolated even in government temple committees which is very serious matter. An inquiry should be conducted into these two cases and stringent action should be taken against the guilty. The root cause of the problems is the government taking over the management of temples; therefore, all temples in State taken over by the Government should be released and handed over to devotees for managing. The above demands were made by Shri. Kiran Duse of Hindu Janajagruti Samiti (HJS), during demonstrations, staged under aegis of ‘Rashtriya Hindu Andolan (RHA)’, on 27th February. Shri. Raju Yadav, Karveer-taluka Chief of Shiv Sena also expressed his views.

1. Shri. Rambhau Methe, Shiv Sena – Pakistan was created for Muslims at the time of partition; but there are ten times more madrasas in India than in Pakistan. One terrorist kills 44 people. 46 madrasas from Uttar Pradesh have not submitted any information about them; therefore, ban should be immediately imposed on all madrasas.

2. Shri. Kishore Ghatge, Sanjay Gandhi Niradhar Yojana-President – Terrorists attacking India get help from within the country. Jihadis are created through madrasas; therefore, there is no peace in India.

3. Shri. Sambhaji Salunkhe, ‘Sevavrat Pratrishthan’ – Enemy like Pakistan is at least known to all but eradication of internal enemies is most essential. Bharat is no longer ‘Gandhi-vadi’ but has now become ‘Savarkar-vadi’ and an apt reply would be given in the future.

Other demands made on the occasion : Conduct in-depth inquiry into brutal murders of devout Hindu activists; immediately impose ban on madrasas which are the root cause of terrorism and on a terrorist organization like ‘Popular Front of India’; rehabilitate Hindu families displaced from Jamshedpur due to threats received from fanatics and provide security to them.