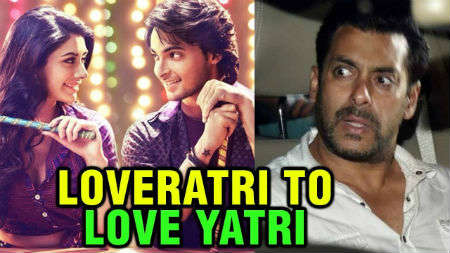 Actor Salman Khan had conspired to release a film called Loveratri – a title that bears an eerie similarity with the sacred Hindu festival, Navratri, and had timed its release near the duration of the holy festival. To oppose this, various Hindu organizations from across the country, along with Hindu Janajagruti Samiti, took to the streets to protest against this in a peaceful and constitutional manner. Over the last two months, these organisations presented a memorandum in this regard to the Central Board of Film Certification (CBFC), administrative officers, ministers and lawmakers. In addition to this, Advocate Sudhirkumar Ojha from Bihar had filed a criminal petition against the film in a court in Muzaffarpur, following which the court had directed the police to file a criminal case against Salman Khan. The collective result of all these efforts culminated into the film’s title being changed from Loveratri to Loveyatri. This is purely a result of the protests carried out in a united and constitutional way, said Ramesh Shinde, National Spokesperson, Hindu Janajagruti Samiti.

Shri. Shinde further asked other filmmakers to follow suit after Salman Khan had to take note of the religious sentiments of Hindus, albeit as a result of the severe widespread protests of Hindus. Mr. Shinde added, “Although the name of the film has been changed, we have not watched the film yet. If it is observed that the film’s content makes a mockery of Hinduism and Hindi gods and deities, then we shall start fresh protests to oppose it,” Mr Shinde warned, on a concluding note.