As per the Principle of spiritual science, energies related to sound, touch, form, taste and smell are always together; thus the idol of a Deity is like actual presence of the Deity. It is an insult of the Deity if broken idol of that Deity is not immersed as per the rituals and the Devasthan Samiti responsible for such insult would be committing sin ! 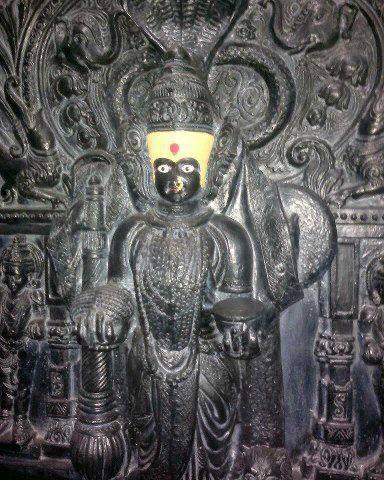 Kolhapur (Maharashtra) : A decision has been taken to give chemical coating on the famous idol of Shri Mahalakshmi Devi. Chemical process on an idol is against Dharma as with chemical coating around the idol, the ‘sattvikata’ emitting from the idol would be reduced.

Guidance on this issue is available in ‘Pratishthakauktikam’ and ‘Nirnayasindhu’ books. Therefore, by performing ‘Tattvotaran’ ritual as prescribed in Dharma-shastra, the Principle of that Deity is removed from the old idol with installation of new idol in its place. The above opinion was given by Shri. Rajan Bunage of Hindu Janajagruti Samiti (HJS).

He was speaking in a press conference held at Shahu-smarak. Advocate Shri. Veerendra Ichalkaranjikar, the President of ‘Hindu Vidhidnya Parishada’ and Shri. Madhukar Nazare of HJS were present on the occasion.

Declare the condition of idol as of today and post its photos on website ! – advocate Shri. Veerendra Ichalkaranjikar

Advocate Shri. Veerendra Ichalkaranjikar said, “Paschim Maharashtra Devasthan Samiti should declare the present condition of the idol if it feels that its standpoint is correct. Photos of the idol can be taken from all sides and posted on its website so that people would also know. The science on which such decision has been taken may be explained. This issue is connected to religious sentiments; therefore, we are taking it to people’s court. Archaeology Department is concerned only about preservation of old things but it lacks knowledge of spiritual science; therefore, they think only about how to preserve an old idol. A representation has been sent to PM Modi, Secretary, Central Cultural Department, Director General of Archaeology Department and the Chief Minister of Maharashtra.

Archaeology Department (wrongly) thinks only about how to preserve a 500 years-old idol for next 500 years. It is not concerned about the ‘sattvikata’ of the idol. We do not want to impose Dharmashastra on anyone but feel that right decision needs to be taken by coordinating with all. In 1961, a lunatic had entered the temple of Shri Bhagavati Devi at Alpuza in Kerala and embraced idol of the Goddess when renovation of that temple was going on; leading to breaking of the idol. In the advice sought from the Goddess, she favoured installation of a new idol. As a result, a new idol was consecrated in the temple in the year 1962. Also idol damaged by Tipu Sultan in attack was also not re-installed but new idol was consecrated.

1. A decision has been taken to give chemical coating to the famous Shri Mahalakshmi Devi’s idol during a joint meeting of Mandir Samiti, Central Govt’s Archaeology Department and State Administration. During 23rd July – 6th August 2015, devotees would not be allowed ‘darshan’ of the Deity in sanctum sanctorum.

2. It is the law of nature that everything goes through ‘Utpatti (creation)’, Sthiti (present condition) and ‘Laya (destruction)’. It is natural that with the ‘sanskars’ carried on the idol, it is likely to face wear and tear, resulting in erosion of the stone. The omniscient Sages have therefore, explained in ‘Dharma-granthas’, rituals for re-consecration of an idol.

3. These days, Shri Jagannath Deva’s ‘yatra’ is going on at Puri, Odisha. In this temple, idols of Deities viz. Shri Jagannath, Shri. Balbhadra, Devi Subhadra and Sudarshan, made of wood, are re-consecrated after 12 years because as per Dharma-shastra, worn out idols should not be worshipped.

4. As per the Principle of spiritual science, energies related to sound, touch, form, taste and smell are always together; thus the idol of a Deity is like actual presence of the Deity. It is an insult of the Deity if broken idol of that Deity is not immersed as per the rituals and the Devasthan Samiti responsible for such insult would be committing sin.

5. An idol of Deity is the Deity Herself /Himself; therefore, its preservation like some antique show-piece is an act done at emotional level. In spirituality, ‘bhav’ towards Dharma-shastra (God realization) is superior; therefore, what is expected by Dharma (God) should be followed rather than what any person would feel. Devotees should, therefore, think about it and force the Devasthan Samiti to abide by Dharma.

7. Lack of Dharma-shikshan is the cause of Archaeology Department interfering in religious matters. Instead of taking action as per Dharma-shastra, Pashchim Maharashtra Devasthan Vyavasthapan Samiti, causing desecration of Shri Mahalakshmi Devi will certainly face wrath of Devi. Devotees should therefore, as their duty towards Dharma, insist that the idol of Shri Mahalaskhmi Devi should be re-installed instead of giving chemical coating.