Special Dialogue: ‘75 years of Independence – Why even now the Naxalism not ended ?’ 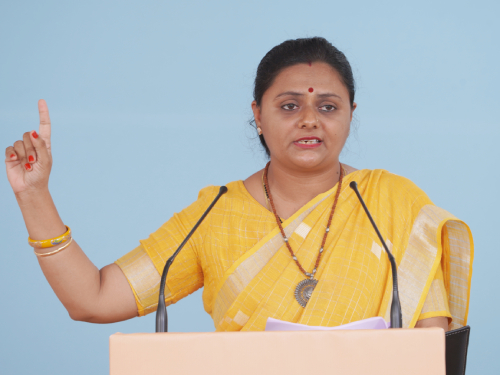 Naxalism is the greatest danger to the internal security of the country. We are getting defeated in the ideological war; even though the Indian army is capable of fighting the armed Naxals in geographical difficult terrain; there is wrong propaganda against them of ‘killing of the villagers’, ‘Oppression/molestation of women’ ‘infringement of human rights’. The armed Naxals are only 25% while the rest of the 75% Naxalite force works through various mediums to continue the movement. ‘It is necessary to fight ideologically the writers, journalists, Political leaders, Social activists who are giving overt or covert support to the Naxal ideology’ says advocate Rachana Naidu from Durg, Chhattisgarh. She was speaking at the special online seminar on the subject ‘75 years of Independence – Why even now the Naxalism not ended?’

Advocate Rachana Naidu added, The Naxalites have killed those who opposed them be it the common man, political leader, and people from various fields. What kind of revolution is it where the Naxalites kill those who they say they are fighting for? On speaking with the surrendered Naxalites it is seen that none of them are connected with the Naxal ideology. Many Hindu temples are broken in the Naxal-dominated areas but it is not heard that churches or other places of worship are harmed.

The Naxals from the remote areas of Chhattisgarh who cannot reach even Ranchi; come on the street to support the Jammu Kashmir Liberation front. In addition, they are seen out on the streets to oppose the Citizenship Amendment Act (CAA), and when Bengaluru’s Gauri Lankesh is murdered. Advocate Naidu ended her talk by saying “The state of Chhattisgarh has Historic, Cultural History, still, it is wrongly called ‘the Naxalite State’, this has to stop.