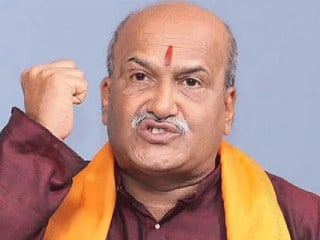 There was knowledge in Kashmir; But there was no power. Due to this Hindus had to flee from Kashmir. Therefore, Hindus need both strength and devotion.

The establishment of Hindu Rashtra is our goal. We have to come together and establish Hindu Rashtra. You have to work hard for it. Time will tell. There is an atmosphere of fear in society. We have to get rid of this fear in the minds of Hindus and build faith and knowledge in society. What happened in Kashmir, Kerala, Delhi, Bihar and Karnataka is a harbinger of a difficult time to come. A need to set goals to deal with this. Physical, mental and intellectual strength should be enhanced. We have to work according to the guidelines received in the Akhil Bharatiya Hindu Rashtra Adhiveshan, appealed Shri. Pramod Mutalik, the founding president of Shri Ram Sena in Karnataka.

Due to the state ban imposed by the then Goa government, the founding president of Shri Ram Sena, Shri. Pramod Mutalik interacted with the delegates of the 10th Akhil Bharatiya Hindu Rashtra Adhiveshan via video-conferencing.