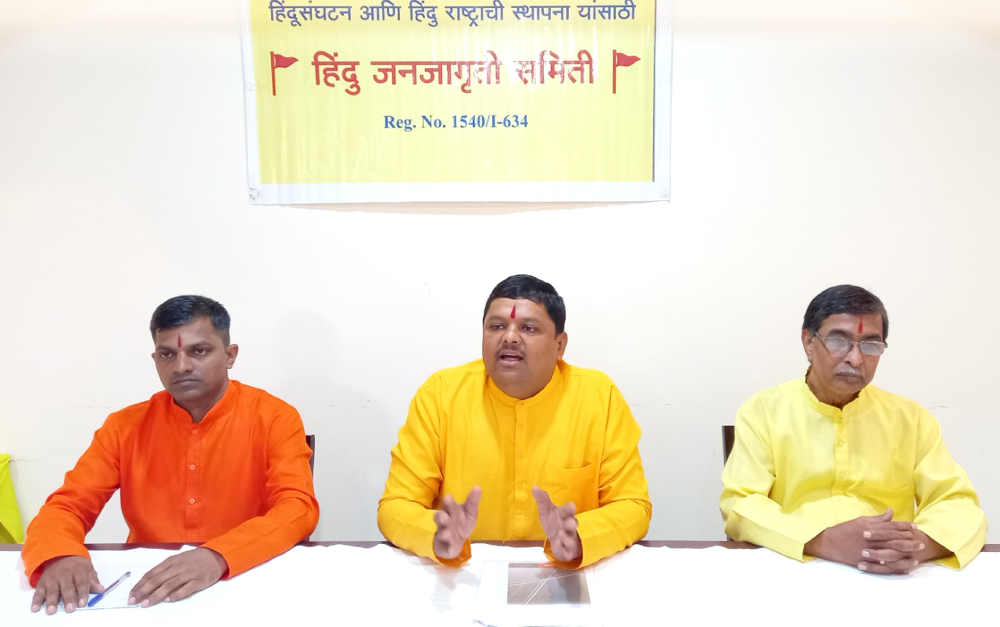 At present, the time is favourable for Hindus. Even when the first convention of Hindu Rashtra was held 10 years ago, everyone was looking at the term ‘Hindu Rashtra’ with scepticism. Today, after 10 years, the word ‘Hindu Rashtra’ has become prevalent, whether in Parliament or in the People’s Parliament. Hundreds of movements from Puri’s Shankaracharya’s ‘Hindu Rashtrasangh’, Kashi Vidvat Parishad’s ‘Sanskruti Sansad’ to ‘Save Temples’ and ‘Reclaim Temples’ in South India have started all over India towards Hindutva and Hindu Rashtra. Hindus have adopted the concept of ‘Hindu Rashtra’. No one can now stop the mission of undivided Hindu Rashtra. Therefore, even if anti-nationals, anti-Hindus, secularists, etc. are working against ‘Hindu Rashtra’, all devout Hindu organisations should come together like Pandavas and prove ‘Vayan Panchadhikam Shatam’ (‘We are 105’) to confront them and fight. This appeal was made in Hindu Rashtra Adhiveshan to the organisations from all over the country and abroad, informed Sunil Ghanwat, Organiser of Hindu Janajagruti Samiti. He was speaking at a press conference in Ponda, Goa. On the occasion Shri. Satyavijay Naik, Goa State Coordinator of ‘Hindu Janajagruti Samiti’ and Shri. Tulshidas Ganjekar of ‘Sanatan Sanstha’ were present.

The names of those working for Hindu Rashtra will also be written in golden letters in history – T. Raja Singh, MLA, Telangana

While participating in this convention, a staunch devout Hindu MLA from Telangana Shri. T. Raja Singh said, “The Saints have said that India will be a Hindu Rashtra by 2025. Every Hindu will have to prepare himself to face the storm that is coming before establishing the Hindu Rashtra. The names of Bhagat Singh, Rajguru and Sukhdev who fought for India’s independence were written in golden letters. Also, the names of those who are dedicated and working for Hindu Rashtra will be written in golden letters in history.

2. The Adhiveshan fully endorses the demand of Nepali Hindus that Nepal be declared a ‘Hindu Rashtra’.

3. The Places of Worship Act 1991 literally slays the fundamental rights of Hindus, may immediately be scraped and the thousands of temples at Kashi, Mathura, Tajmahal, Bhojshala, etc. that were taken over by the Moghul invaders be handed over to Hindus.

4. All the Government controlled temples across the country be released from the Government’s control and be handed over to the devotees.

5. The Union Government pass laws to stop cow slaughter and conversion in the entire country. For stopping conversions, Article 25 of the Constitution be amended and the word ‘propagate’ pertaining to religion be deleted.

6. When Government agencies such as ‘Food Safety and Standards Authority of India (FSSAI)’ and ‘Food and Drug Administration (FDA)’ are already in force in India, the Halal certification that generates a parallel economy on religious grounds be immediately banned.

7. The Pope (Head of the Church) must render a public apology to the people of Goa for the extreme atrocities on the goan people in the name of inquisition.

8. A new Union Territory by the name of Panun Kashmir be formed in Kashmir valley and rehabilitation of the displaced Kashmiri Hindus be done there.

9. The atrocities on Hindus from Pakistan, Bangladesh and Sri Lanka be investigated by the International Human rights Organisation and the Indian Government and the Hindus there be given protection.

10. The Government of India should form stringent laws to deport the Rohingya Muslims and Muslims from Bangladesh who have entered India illegally. Immediate implementation of C.A.A.

11. Seeing the huge population rise of the non-Hindus in the past few years, to maintain the balance of people of all religions, Population Control Act be immediately implemented in India.

12. From a humanitarian perspective and giving due thought to the Constitutional rights, The Chief Minister of Goa should lift the ban on entry in Goa on Mr Pramod Mutalik, the President of Shriram Sena from Karnataka.