Pro-Hindu advocates, and devout Hindus resolve to take an active part in the mission of establishment of Hindu Rashtra !

Mr Sunil Ghanavat, the State-coordinator of Hindu Janajagruti Samiti (HJS) for Maharashtra and Chhattisgarh called on devout Hindu activists during his tour for contacting people and to associate them with the mission of establishment of Hindu Rashtra. During this tour, he met devout Hindu advocates, businessmen, traders, and elected representatives. He explained the different issues in different meetings held with them.

Meetings with pro-Hindu advocates, businessmen, and devout Hindus at Nevasa !

A meeting of devout Hindu activists and devout Hindu youth was held at Prabhu Shriram Mandir, Nevasa Budruk. Mr Sunil Ghanavat had detailed discussions with them about attacks on Hindu Dharma and some of the positive changes taking place in India. The devout Hindu activists showed interest in organising Hindu Rashtra-jagruti Sabha, offering to make all necessary arrangements for the ‘sabha’. 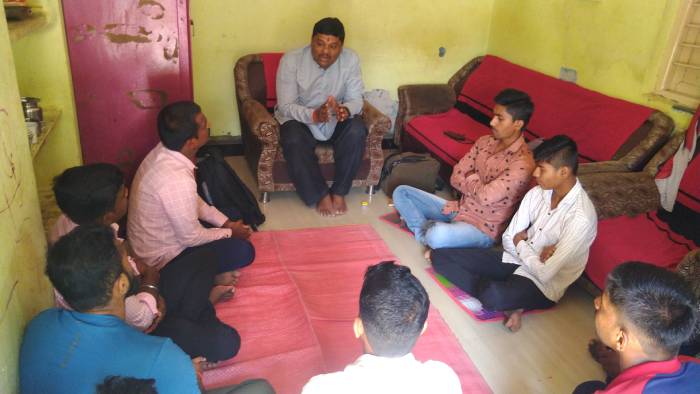 A meeting was held with devout Hindus from Darewadi and Valunj; so also from Baburdi Ghumat. Mr Sunil Ghanavat explained to them about various attacks on Hindu Dharma and the efforts made towards the goal of establishing Hindu Rashtra. The participating devout Hindus suggested holding Hindu Rashtra-jagruti Sabhas at 11 places in Darewadi area and showed readiness in taking part in the demonstrations to be held at Nagar once a month.

There are very few people like you who sacrifice everything for ‘Dharmakarya’ ! – Nilesh Lanke, NCP-MLA

NCP-MLA Nilesh Lanke said there are very few people who sacrifice everything for ‘Dharmakarya’, while commending HJS activities. Despite his busy schedule, MLA Lanke took out time for HJS activists. Detailed discussions were held on malpractices at Tuljapur Devasthan and encroachment by religious fanatics on different forts. MLA Nilesh Lanke promised to forward these issues for discussion during the State Legislative Assembly session. A meeting was held at Shevgaon with advocates. Mr Sunil Ghanavat showed to them a video on various activities undertaken by HJS and Hindu Vidhidnya Parishad and explained their activities at the organisational level. There was good participation by the attendees. They all showed interest in attending the regional Hindu Rashtra Convention and asked HJS to conduct ‘Dharmashikshan’ meeting twice a month.

A meeting was held to discuss the subject of ‘halal’ certification at Shriram Mandir, Pathardi, with eminent businessmen and teachers. It received a good response from all participants. Many of the participants were associated with RSS. They showed interest in HJS holding ‘Dharmashikshan’ class once a month. More than 20 people attended the meeting.

A similar meeting was held at Vitthal Mandir in Nagar city, and it was attended by eminent businessmen from the city. It was resolved to come together against all attacks on Hindu Dharma.

Mr Ghanavat first explained about different types of ‘jihad’ before explaining the serious conspiracy of ‘halal’ certification, giving proofs. The participants decided to organise a meeting at a higher scale by inviting all Hindu businessmen of Shrirampur; so also, organise Hindu Rashtra-jagruti Sabha at Shrirampur. 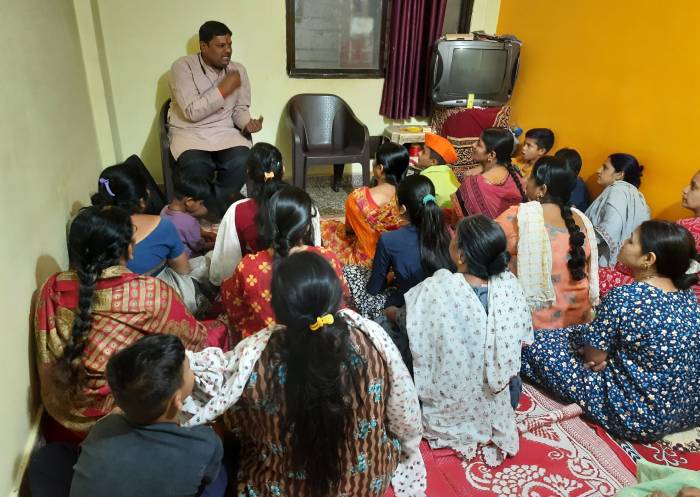 A meeting was held with devout Hindu women attending ‘Dharmashikshan’ classes conducted by HJS at Nagar. There was a good response from devout women. They felt that one has to devote time to the issues related to the protection of Nation and Dharma. Discussions were also held on the preservation of forts, various attacks on Hindu Dharma, and ways to stop them by Hindus. Many women attended the meeting.

An informal meeting was held with renowned industrialist Narendra Firodiya of Nagar who is also the President of ‘Nagar Sahitya Parishad’. Many subjects were discussed, and he was extended an invitation by Mr Sunil Ghanavat to attend the tenth all-India Hindu Rashtra Convention being held at Goa.