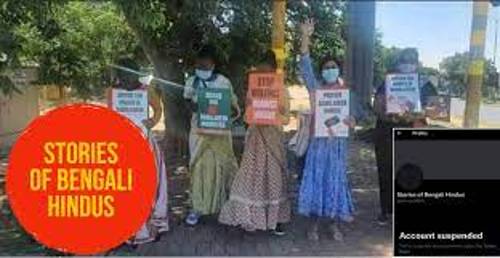 We, the team of Stories of Bengali Hindus, dejectedly announce that our Twitter account @storiesofBHs has been suspended by @Twitter. We got to know about this on 01/12/2021 at 07:17 hours IST.

Our Twitter journey has come to an abrupt halt for now. pic.twitter.com/urPsbMnjhM

Dr Das wrote that they received an email from Twitter stating that we were suspended in view of “ban evasion”. He asked the microblogging site to provide more explanation for the suspension. Interestingly, while Twitter said that it had suspended the account in view of “ban evasion”, it provided no explanation as to which ban had the account exactly evaded.

Das said that this is the first time the account has been suspended, it was never suspended in the part, therefore it is not clear how the account violated norms by evading a ban.

In his subsequent Tweet, Das wrote: “@storiesofBHs had been a place where Bengali Hindus from East Bengal spread across the world could come together and share their stories of intergenerational/transgenerational trauma which were untold and ignored. @Twitter has, through this, put down our voices and stories.”

He also informed that ‘Stories of Hindu Bengalis’ are considering all options as of now, He urged everyone to rally support for them.