The Christian missionaries in Kerala have been constantly raising concerns about the Love Jihad but missionaries in the neighbouring state Karnataka are unhappy where the government is contemplating bringing an ‘Anti-Conversion Law’ that can effectively curb the devil of Love Jihad. 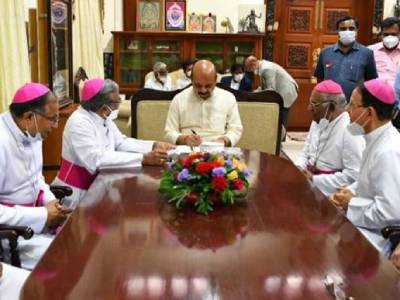 The delegation headed by Archbishop of Bangalore Peter Machado raised their concerns on the proposed law to make forcible religious conversions in Karnataka a punishable offence. Peter Machado had earlier opposed the Citizen Amendment Act enacted by the Narendra Modi government.

The Bishop handed over a memorandum to the chief minister stating that the proposed anti-conversion law was unwarranted, claiming that it will lead to unnecessary communal issues and unrest in Karnataka.

The home minister of the BJP ruled Karnataka Araga Jnanendra had recently stated during the assembly debate that the government is considering passing a law to regulate religious conversion.

The state home minister was replying to a question raised by the BJP MLA from Hosadurga constituency Goolihatti Shekhar during the ‘Zero Hour’. The MLA left everybody shocked when he revealed that his own mother fell prey to inducement and converted to Christianity. The MLA had expressed concern that conversion has gone rampant in Karnataka adding that around 15,000 to 20,000 persons of his constituency got converted to Christianity.

The MLA said that his mother has been told not to put ‘kumkum’ (vermillion) on her forehead. She had changed the ringtone of her cell phone to Christian prayers and she threatens to commit suicide if anybody tries to stop her. The MLA had further said that Christian Missionaries had called his mother for prayers and misled her that she will feel better after prayer and trapped her in this way. He said that his mother now doesn’t like even a picture of Hindu God and Goddess.

As the Karnataka government has taken a serious note of conversion and has officially announced that an anti-conversion law is under consideration, it has left missionaries worried.

Archbishop of Bangalore Peter Machado also contradicted allegations and said someone was trying to malign them and missionaries don’t force anyone for conversion. The delegation also demanded representatives of Christian management should be included in committees formed to implement the new National Education Policy (NEP).

Notably, the Karnataka government has set a target to ensure implementation of National Education Policy 2020 in the next 10 years against the 15 years target set by the Centre.