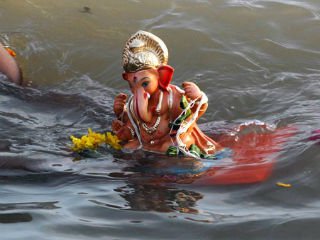 Kolhapur : For the last several years, Hindu Janajagruti Samiti (HJS) has been explaining the science of immersion of murtis in flowing water and undertaking an immersion drive during the Ganesh festival. There are restrictions due to the Corona pandemic in the last 2 years on actually going to the sites of immersion; still, it was observed that in most of the villages, there was 100 % immersion of murtis. A memorandum was submitted like every year to the local administrations and awareness was extensively created even through social media.

1. At Kerli in Karveer Taluka, there was 100% immersion of murtis. The Rotary Club, two local colleges, and Gram panchayat jointly undertake a drive for the donation of murtis. Even this year, 10 murtis were given as a donation in the beginning. A local devout Hindu Mr Sanjay Mane discussed the matter with Gram-panchayat member Mr Deepak Patil. Mr Mane explained how taking Shri Ganesh murtis in donation, amounted to the denigration of the Deity when Mr Deepak Patil said that he would immerse the collected murtis in flowing water. Thus, the murtis were immersed in water by Gram-panchayat members and Mr Deepak Patil. The devout Hindus viz Tanaji Patil and Rajaram Mane participated in this drive. (Congratulations to all devout Hindus who took initiative in the immersion of Shri Ganesh murtis in flowing water as per the science! Such alert devout Hindus are the ray of hope for Hindu Dharma! – Editor, Hindujagruti)

2. The Town Council of Malkapur kept its promise made to HJS and didn’t force anyone to donate the murtis. Here, 3 murtis were received in the donation. When HJS activist, Dr. Sanjay Gandhi heard about it, he appealed to the Chief Officer, Mayor, municipal councilors to pay respect to the religious sentiments of Hindus and immerse the murtis. HJS activists Mr Prasad Kulkarni, Sudhakar Mirajkar, Vishwas Patil, Ashish Kolwankar, Anant Dhone, etc were present at the site of immersion till late night.

5. Devotees immersed murtis in the Panchganga River at Shiye.