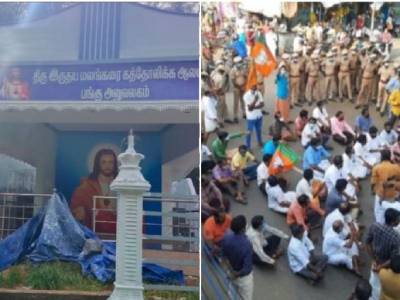 Several Hindu activists, including BJP workers, protested outside the Kanyakumari administration on Saturday, demanding the removal of an unauthorised church that had come up recently near the Mathur Aqueduct in Kalkulam Taluk of Kanyakumari district, reports Commune Mag.

According to the reports, more than 300 Hindu activists, joined by RSS, members of Hindu Munnani, and a few local villagers, staged roadblocks at around 50 places in the district demanding the removal of the illegal church. Nagercoil BJP MLA MR Gandhi and BJP Kanyakumari District President Dharmaraj also participated in the protests on Saturday.

The locals alleged that the church has been built illegally without permission. As per the Venugopal Commission report, the Hindu activists said no Church could be built even on private land or public land after the Mandaikadu communal riots. They alleged that Christian missionaries clandestinely took over a building on rent and erected a “cross” later.

“Sometimes, they build a structure without permission and function without electricity connection for years. Later, they use their influence and regularize the Church. There are hundreds of Churches in the district like this,” he said.

As the protest intensified, the Tamil Nadu police arrested the Hindu leaders, including the BJP MLA and several prominent activists. The arrested leaders were later released in the evening.

Following their release, BJP MLA MR Gandhi along with BJP District President Dharmaraj, RSS leader Rajendran, Misa Soman from Hindu Munnani and other Hindu activists held a consultation with the sub-collector. The sub-collector said that permission was not granted to build a new church. The administration and the Hindu leaders reached an interim arrangement, according to which, the building would be covered by tarpaulin.