Patriots and devout Hindus raised their voice against the consistent denigration of Hindu Deities and National Heroes through Web Series. Therefore, the Government made rules for the producers of ‘Web Series’; yet the denigration of Hindu Deities still continues as there is no provision of any stringent punishment for the defaulters. To put an end to it, strong unity of Hindus is the need of the hour. 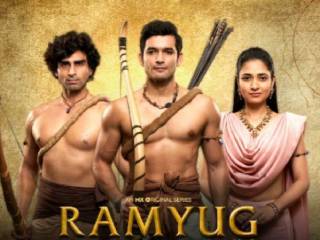 Mumbai : Kunal Kohli, the Producer – Director of Web Series, Ramyug has tried to present Hindu’s Deity of worship Shriram, Mother Sita and other Seats of faith with a touch of modernity and hence, the Web series is being criticised at all levels. This Series is being screened on OTT Platform of MX playerfrom 6th May.

Director Kunal Kohli said, ‘Presently, the citizens are disappointed due to the coronavirus pandemic. The Nation is going through a very challenging period. I hope that the citizens of this Nation will get energy through this Web Series’.

Although this is so, this Web Series is not appreciated by the devotees of Shriram for its derogatory presentation in a modern way with no connection to the spiritual aspects.
In this Web Series, the characters of Shriram and Lakshman are shown with beard, Mother Sita is shown adorning modern attire.

Throughout this Web Series, the dialogues do not sync with the original Ramayan period. The dialogues are modern, actors too appear modern in acting. King Vali is shown with ‘tattoo’ on his body, his dress too appears like that of a demon. For all these reasons, the viewers seem to have rejected this Web Series.

How have you presented our beloved Deities ? – Gufi Paintal, famous director and actor

In my childhood, I have seen Ramleela many times in the fair in my village; but I never was bored despite seeing the story repeatedly; because there used to be spiritual emotion of devotion (Bhaktibhav) in it. There is no such thing in the Web Series ‘Ramyug’; but glamour. The Producer of this Web Series has spent crores of rupees on expensive ‘Set’, ‘Special effects’, costumes, etc. but failed to do research on the ‘Ramayan’. Normally we should enjoy seeing Shriram; but in this Series, viewers are sad to see the character of Shriram. How have you presented our beloved Deities ?, expressed the famous director and actor, Gufi Paintal. His role of ‘Shakunimama’ in Yash Chopra’s famous series of Mahabharat was very much acclaimed by viewers.

Do not destroy the culture with modernity – Mukesh Khanna, Senior actor

Ramayan – Mahabharat are our Seats of faith, hence they must be presented well. Ramayan is not a story, it is our history. It is erroneous to present it as Bahubali, you have no right to destroy our Seats of faith. You can make changes in the character of ‘Shaktiman’, but you cannot alter Ram-Sita. This is not just a story of a King-Queen. It is our ideal. If you are interested in presenting the Ramayan, then give prominence to faith in it. We have never seen the character of Ram having beard. Culture can never be modern. Currently, those who are governing the Nation and the people of this Nation need the Rule of Shriram, that is, Rule of Righteousness. Present such a Ramayan that will instil subconscious impressions (Sanskar) on the minds of people in society.