The Central Government issued an order on Wednesday to bring digital and online media, audio-visual programs, films, current affairs, and news portals under the Ministry of Information and Broadcasting.

A notification was issued by the cabinet secretariat on 9th November, which was published in the Gazette of India dates 10th November 2020. The notification amends the Government of India (Allocation of Business) Rules, 1961, and adds two sections in the second schedule of the rules, under the Ministry of Information and Broadcasting. The newly added sections that has been brought under the ministry say:

VA. DIGITAL/ONLINE MEDIA
22A. Films and Audio-Visual programmes made available by online content providers.
22B. News and current affairs content on online platforms. 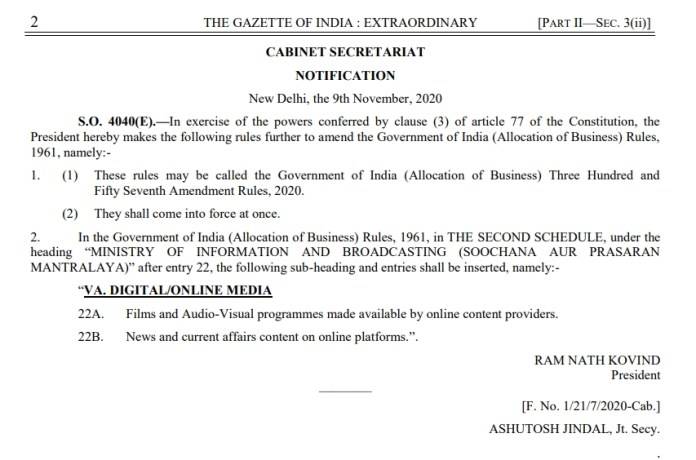 Currently, online news and current affairs portals, OTT (over the top) platforms including Prime Video, Netflix, Hotstar, SonyLiv, AltBalaji, etc are not under the Ministry of Information and Broadcasting. Several complaints against the content on such platforms were alleging they are spreading misinformation and fake news as there was no law or autonomous body to govern the digital content. There were also demands of censorship for shows aired by the OTT platforms, and there have been several complaints against such shows alleging hurting religious sentiments and other allegations.

Due to increasing Hinduphobic content, along with scenes openely using violence, abusive language and nudity, on OTT platforms; Hindu Janajagruti Samiti had started online signature campaign with demand to regulate content shown on OTT platforms. It received good response from the Hindus and the society too. The signature campaign had urged I&B Ministry with above demand.

In the last few years, there have been several complaints against the OTT platforms for producing Hinduphobic, sexual, and misleading content. The demand for either forming a governing body or bringing online content under censorship was raised several times. Last month, Supreme Court had sought the Centre’s response on a petition filed that had asked for a regulatory or autonomous body to monitor content on OTT platforms. In a separate case, the ministry had previously told the apex court that there is a need for a regulatory body to censor digital media content. In a statement last year, Union Minister Prakash Javdekar said that the ministry would not curb freedom of speech and expression, but there is a need to regulate OTT platforms’ content. If needed, the government will regulate the content.