In this period of polarization taking place at thought level, walk on the path of establishment of Hindu Rashtra in support of Hindu Dharma! – Sadguru (Dr.) Charudatta Pingale

‘Tablighi Jamaat’ played the role of ‘Corona carriers’ in this period of Corona-pandemic while several pro-Hindu organizations became ‘Corona-warriors’ and served people. The whole world accepted and promoted principles followed in Hindu Dharma like greeting people with folded hands, practising of Yoga, ‘Pranayam’, and have vegetarian food etc. The world is moving in the direction of third World War. Even in India, we are facing severe insurgencies in different forms. The Government implemented Citizenship Amendment Act few months back for the oppressed Hindus from Islamic countries but anti-national forces strongly opposed to the same. Temple culture of this country is also under attack. Such incidents showed that the country would have to fight against ‘jihadi’, communist and ‘secular’ forces in the forthcoming period. Polarization is taking place in every field like politics, education, media, art etc between patriot, devout citizens and factions which are against the nation and Dharma. In this period of polarization at thought level, we should walk on the path of establishment of Hindu Rashtra supporting Hindu Dharma, stated Sadguru (Dr.) Charudatta Pingale, the national Guide of Hindu Janajagruti Samiti (HJS) during the inaugural program of ‘Online Ninth all-India Hindu Rashtra Convention’. 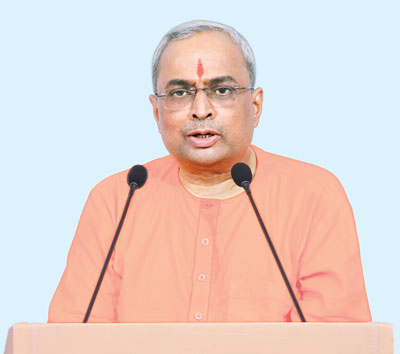 The Convention was started with blowing of conch and recitation of ‘Vedmantras’. Shri. Ishan Joshi of ‘Sanatan Purohit Pathashala’ blew conch while he and Purohit Amar Joshi recited ‘Vedmantras’. Sadguru (Dr.) Charudatta Pingale lighted the lamp. Sanatan Sanstha’s Dharmaprasarak Sadguru Satyavan Kadam read out the message sent by ‘Paratpar Guru’ Dr. Athavale, the Founder of Sanatan Sanstha and the Inspiration behind HJS. Shri. Chetan Rajhans, the national spokesperson of Sanatan Sanstha explained the purpose of holding the Convention. He said, “There is not a single Hindu Rashtra for 100 crore Hindus in this world. This Convention is being held for working towards official declaration of Bharat and Nepal as Hindu nations. Let us become active and spread the concept of Hindu Rashtra in every house and to every person.”

Every year the Convention is held at Ponda, Goa; however, due to Corona pandemic, it is being held ‘Online’ this year though it has not at all adversely affected the enthusiasm of devout Hindu activists and patriotic citizens. Moreover, information of the Convention has been more widely spread this year. A trend ‘We_Want_Hindu_Rashtra’ was also started discussing on Hindu Rashtra on ‘Twitter’.

In the all-India Hindu Rashtra Convention held in the year 2014, a resolution was passed unanimously for giving citizenship to oppressed Hindus from Pakistan and Bangladesh. This proposal was then sent to the Union Government and within a month after receiving this proposal, a meeting was organized by the Government at Delhi, of organizations working for displaced Hindus from Pakistan. HJS was invited to this meeting as the Convener of all-India Hindu Rashtra Convention. HJS firmly explained its stand that Hindu refugees coming from Pakistan should get Indian citizenship. This meeting later became the base for drafting of CAA. There was no mention of Bangladesh in ‘Citizenship Act-1955’ because Bangladesh was not an independent country at that time. HJS had however, stated in the meeting that Hindu refugees from Bangladesh should also be given Indian citizenship. The Union Government then promised to hold a central meeting for the same and asked HJS to give information on organizations working for Bangladeshi Hindus. Consequently, we can observe that in the next 6 years, the CAA was amended with inclusion of Bangladesh and Afghanistan. So, overall, we can say that CAA was in a way an outcome of all-India Hindu Rashtra Convention. -Sadguru (Dr.) Charudatta Pingale

‘Online all-India Hindu Rashtra Convention’ will be held from 30th July to 2nd August and from 6th to 9th August 2020 with timing of 6.30 p.m. to 8.30 p.m. and is open for all. It will be shown ‘live’ on following links. HJS has made an appeal to all people for taking benefit by watching this Convention.