On the occasion of ‘Shivarajyabhishek Day’, a special ‘Online’ interaction ‘Hindavi Swarajya to Hindu Rashtra (Nation)’ 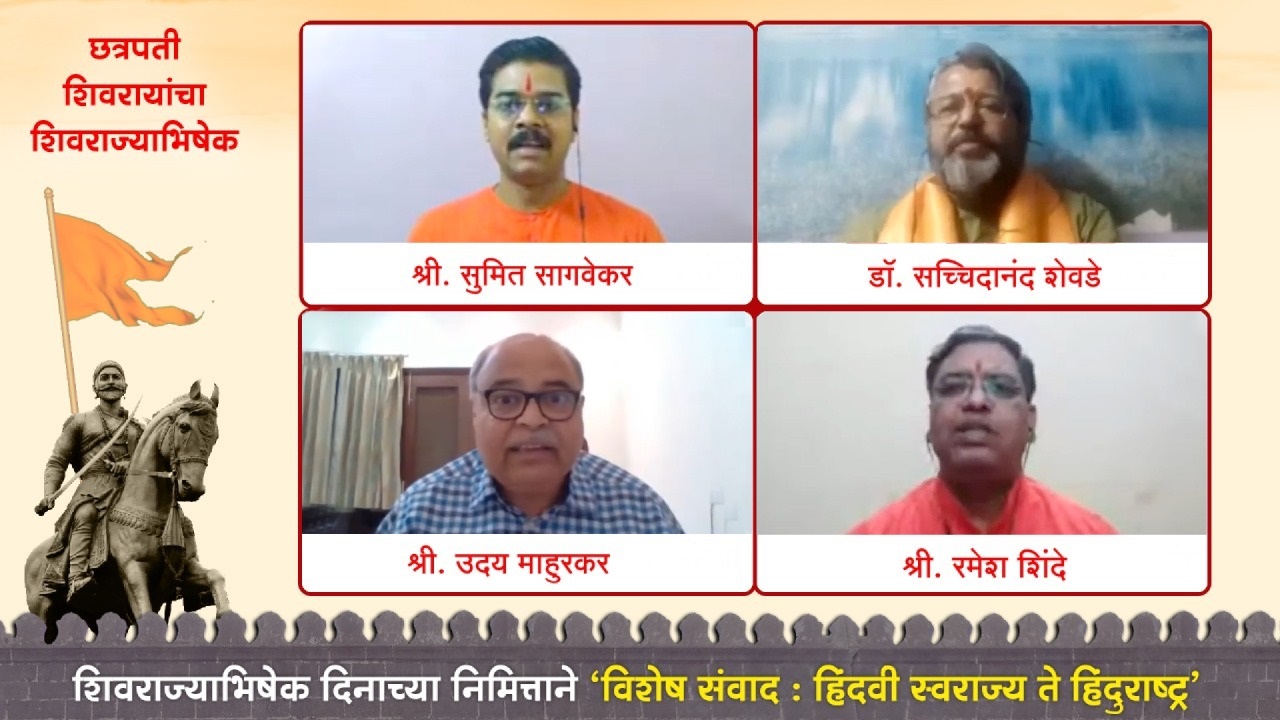 He was speaking at the special ‘Online’ interaction on ‘Hindavi Swarajya to Hindu Rashtra (Nation)’ organised by Hindu Janajagruti Samiti on the 4th June on the occasion of ‘Shivarajyabhishek Day’. In this interaction, famous writer and speaker, Dr. Sachchidanand Shevade spoke on ‘Hindavi Swarajya’ and National Spokesperson of Hindu Janajagruti Samiti Mr. Ramesh Shinde spoke on ‘Hindu Rashtra (Nation) from the viewpoint of Chhatrapati Shivaji Maharaj. At the outset, Dharmaprasarak of Sanatan Sanstha Sadguru Nandkumar Jadhav garlanded the idol of Chhatrapati Shivaji Maharaj. Mr. Sumit Sagvekar conducted the programme. The programme which was telecast live on Facebook and YouTube was viewed by 60,000 people and reached 65,000 people.

‘Swarajya’ of Chhatrapati Shivaji Maharaj was not Sarvadharmasamabhavi, but ‘Hindavi’ ! – Dr. Sachchidanand Shevde

‘Chhatrapati Shivaji Maharaj generated pride for Dharma among the people who were persecuted by the Mughals and protected Dharma. He did not attack anybody with a sword to propagate Hindu Dharma. Is it because of this that the rule was labelled as Sarvadharmasamabhavi under the assumption that Hindu’s kingdom would definitely be all-encompassing ? Chhatrapati Shivaji Maharaj created the royal signet in Sanskrut language. His coronation ceremony was held in Vedic manner. However, the Hindu-proponents of Sarvadharmasamabhav are unfortunately trying to erase its identity of ‘Hindave Swarajya’, said devout Hindu writer and speaker Dr. Sachchidanand Shevade.

‘Hindavi Swarajya’ of Chhatrapati Shivaji Maharaj is the ‘Hindu Rashtra’ itself ! – Ramesh Shinde

‘The region with only borders is called ‘country’; whereas, the concept of Rashtra (Nation), also includes history, language, culture, a measure of time, etc. of that region. In that sense, the ‘Hindavi Swarajya’ established by Chhatrapati Shivaji Maharaj is the ‘Hindu Rashtra’ in itself. He prepared the Government gazette by removing the Farsi words. He purified the converted Hindus and took them back in Hindu Dharma. He issued orders to build temples. A ‘collection of letters’ of correspondence made during the reign of Chhatrapati Sambhaji Maharaj is famous. Even that collection makes a reference to the ‘Hindu Rashtra (Nation)’. Dr. Babasaheb Ambedkar said during his speech in the Parliament that Chhatrapati Shivaji Maharaj fought for the freedom of Hindus. Even then, why is there an insistence on labelling ‘secularism’ from the 19th century to Chhatrapati Shivaji Maharaj from the 17th century ?’, asked Mr. Ramesh Shinde. In the end, Mr. Shinde appealed to Hindus to awaken their pride and spare at least 1 hour daily for the ‘Hindu Rashtra (Nation)’

After the tremendous response received by the programme held in the Marathi language on 4th June on the occasion of ‘Shivarajyabhishek Day’, the Shivaji-lovers and patriots demanded that a similar programme should be held in the Hindi language also. Accordingly, an online ‘special interaction’ will be held on the topic ‘Hindu Rashtra of Chhatrapati Shivaji Maharaj’ in Hindi language on 6th June 2020 from 7 p.m. to 8.30 p.m. The live telecast of this programme will be available on Facebook Live and YouTube Live. Mr. Suresh Chavhanke, Chairman and Chief Editor of ‘Sudarshan news’, Mr. Pramod Muthalik, Founder President of Sriram Sene, Sadguru (Dr.) Charudatta Pingale, National Guide of Hindu Janajagruti Samiti and Mr. Ramesh Shinde, National Spokesperson of Hindu Janajagruti Samiti will guide in the programme as dignitaries. Therefore, an appeal is made to the people to accrue the maximum benefit from the programme. Read More