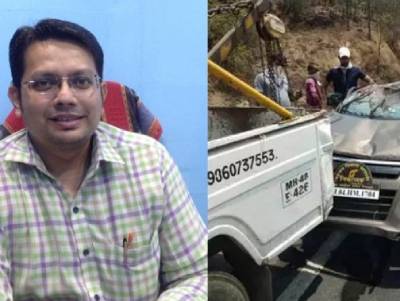 Digvijay Trivedi, a lawyer representing the sadhus on behalf of Vishwa Hindu Parishad in the Palghar lynching case, died in a road accident yesterday. The accident happened on the Mumbai-Ahmedabad national highway near Manor on Wednesday morning when Trivedi was heading towards Dahanu court in his car.

According to reports, the accident took place on the Gujarat lane of Mendhwan bridge at Manor at around 9.30 am. The car skidded off the road and turned turtle, killing Trivedi instantly, while a woman accompanying him was injured. It is believed that Trivedi was overspeeding and lost control of the car, causing the fatal accident. The woman, who was yet to be identified, was admitted at a hospital.

Trivedi was going to the Dahanu to attend the hearing in the Palghar Sadhu lynching case, where he was representing the victim Hindu saints on behalf of the Vishwa Hindu Parishad. Yesterday he was scheduled to present his side of the case before the court.

Trivedi also handled the legal cell of Bahujan Vikas Aghadi, a political party in Mira-Bhayander, where he belonged to.

The Maharashtra CID has arrested a total of 141 people in the case so far, which includes 10 minors. The minors have been sent to juvenile home. Among the adults, 101 people have been remanded to judicial custody, and the rest are in police custody.

On 16th April 2020, two Seers associated with the Juna Akhara, 70-year-old Kalpavrishka Giri Maharaj, and 35-year-old Sushil Giri Maharaj along with their driver 30-year-old Nilesh Telgadewere were on their way from Mumbai to Gujarat to give Samadhi to another Guru. At Gadakchinchale village, a wild and frenzied crowd of over more than 100 people attacked them. The villagers deemed them as thieves and started attacking them. The police claim that their team which had rushed to the spot to rescue the 70-year-old man also came under the attack of the violent mob.

But later videos of the heinous act emerged that completely debunked the claim of police. It was seen that the sadhus were in the custody of the police but later the police personnel handed them over to the mob. Then the mob had beaten them to death in front of the policemen.

The Supreme Court has sought a report from Maharashtra Police regarding the status of the investigation in the Palghar lynching case in which two Hindu sadhus and their driver were lynched by a mob on the night of April 16. The court was hearing a plea seeking a CBI probe into the case monitored by an SC monitored SIT or a judicial commission.

According to the reports, the apex court refused to stay the current investigation in the case by state CID and asked the petitioner to serve a copy of the plea to standing counsel for Maharashtra. The Supreme court ordered the Maharashtra government to file a report pertaining to investigation within four weeks.

How did such a mass gathering happen during lockdown: Supreme Court

A bench of Justices Ashok Bhushan and Sanjiv Khanna hearing the petition through video-conferencing said that it wanted to know the status of actions that have been taken so far by the police against the perpetrators of the crime. The court also asked how did the authorities allow such a mass gathering of people to violate the lockdown.

The plea said, “This happened despite the fact that the whole country is under Lockdown since March 25 and that no person is allowed to be out of their house and everyone has been asked to follow social distancing which raises a huge suspicion on part of local police.”

The plea, filed by petitioner Shashank Shekhar Jha through his counsel Rashi Bansal, has sought a direction to the authorities to constitute an apex court-monitored SIT or a judicial commission headed by a retired top court judge to deal with the case. The plea also sought CBI investigation into the matter.

The plea also demanded filing of FIR against concerned police officials for their failure to prevent the incident. The plea stated that the incident was a failure on the part of the police as a mob had gathered there in violation of the lockdown rules. The petitioner referred to the media reports and claimed that police was complicit in the incident as they did not use force to prevent it.

The plea alleged that the whole incident was “pre-planned and there could be police involvement as well” and urged the court to transfer the case from Palghar to a fast track court in Delhi.

In the wake of the brutality inflicted on two Dashnami Sadhus and their driver by a murderous mob in Maharashtra’s Palghar, the Hindu Dharma Acharya Sabha has written to the Maharashtra Governor, Bhagat Singh Koshyari on April 24. In the strongly worded letter, the Sabha has condemned the lynching of Sadhus and their associate in Palghar and raised questions on the circumstances, history of the region, mishandling of the case and the state government and police’s attempt to shield the perpetrators.

In the letter, shared by Amit Malviya on Twitter, the Sabha draws Bhagat Singh Koshyari’s attention towards the notorious history of the region where the gruesome crime was consummated, proving beyond doubt, that the people living in that region have a complete negative perception towards Hindus.

The Hindu Dharma Achara Sabha writes a letter to the Maharashtra Governor, condemning the murder of Hindu sadhus in Palghar in no uncertain terms, raise questions on the circumstances, history of the region, mis-handling of the case and attempts to shield the perpetrators… pic.twitter.com/rVgGh9pLLu

Past incidents that happened in Palghar

Taking into account these past incidents, the sabha said it believes that the brutal lynching was not a normal crime but a part of a deeper conspiracy. It said that the mob attack in Palghar was not an assault on merely two Sadhus but a planned incursion on the Hindu society and culture as a whole.

Seeking accountability from the government

Condemning the incident without mincing words, the letter sought an answer from the Maharashtra government. It said that after the video of the lynching went viral on social media and drew sharp condemnation from Hindu’s, Home Minister Amit Shah intervened and asked the state government to take action. Buckling under pressure, the state government led by CM Uddhav Thackeray did make arrests, but the actual culprits behind the murder have not been arrested by the police. The police laxity in handling the case and the discrepancies between the complaint and the video evidence has been questioned. The Hindu Dharma Achara Sabha asks the Maharashtra governor as to why no action has been taken against the police officials who have shown laxity and created loopholes for the real culprits to escape the clutches of law.

Denouncing the heinous incident, and casting aspersion on CM Uddhav Thackeray and his governments’ laxity and the state police apathy and treachery in handling the lynching case, the Hindu Dharma Achara Sabha urged the governor to take firm action into the case.

It is an assault on the Hindu faith by leftists: VHP meets Maharashtra governor, demands high-level probe into Palghar lynchings

The blood-curdling incident happened on 16th April 2020 in Palghar, Maharashtra. Two Sadhus, 70-year-old Kalpavrishka Giri Maharaj and 35-year-old Sushil Giri Maharaj along with their driver 30-year-old Nilesh Telgade associated with the Juna Akhara were on their way from Mumbai to Gujarat to give Samadhi to another Sadhu. At Gadakchinchale village, a wild and frenzied crowd of over more than 100 people attacked them. Videos of the incident showed the local police ignoring the pleas of the bleeding Sadhus and handing them over to the murderous mob.

The state government has handed over the case to CID. Over 100 people, including several juveniles, have been arrested so far.

Saints of ‘Shri Panch Dashnam Juna Akhara’ Kalpavrukshgiri Maharaj and Sushilgiri Maharaj along with their vehicle driver were killed inhumanly by a violent mob in the very presence of the Policemen. In this regard, the videos reveal the gruesome incident that the Policemen themselves handed over the Saints to the violent mob and the killing was carried out in their presence. When the If the Police who are responsible for the security of the people are assisting murderers, whom should the people turn for help ?

Earlier too, the Police had abducted a devout Hindu and took him to the residence of a Minister where he was mercilessly beaten. The pride earned by the Police department after the martyrdom of Tukaram Ombale is getting tainted by such incidents. To prevent such violent acts which persistently target Hindus, it is necessary to take stringent action against the accused. We demand that in the Palghar incident, a high-level inquiry should be initiated and an offence under IPC 302 should be registered against the violent mob and the errant Policemen.

The Government should provide exact details of the incident to the people. The very fact that a mob of hundreds of people come out in the night carrying sticks during the lockdown period and killed Saints inhumanly while they were beggin the Police for the protection is horrendous. ‘Shri Panch Dashnam Juna Akhara’ is the biggest Akhara of the 13 such Akharas throughout the country. The entire country is enraged by the incident. Therefore, we demand that the Government should take immediate action.

Despite #lockdown,how could a mob of over 110 manic people gather at #Palghar& #lynch 3 people,including 2 #Sadhus,to death?

Seeing the visuals that have come out, Palghar incident of mob lynching is shocking & inhuman.
It is more disturbing especially when we are going through such tough times otherwise too.
I urge the State Government to immediately set up a High Level Enquiry and…
(1/2)

Despite #lockdown,how could a mob of over 110 manic people gather at #Palghar& #lynch 3 people,including 2 #Sadhus,to death?