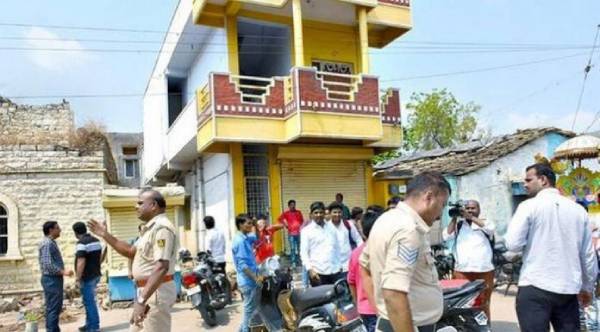 On Sunday, the contentious slogan of “Pakistan Zindabad” was found written on the wall of the house of one Kishan Rao Hagaragundagi, a local resident of the Haft Gumbaz locality of Kalaburagi, Karnataka.

Abusive and highly objectionable words against Prime Minister Narendra Modi were also scribbled on the wall with charcoal by unidentified miscreants. A complaint was filed by one Manoj Chaudhary who lives as a tenant in the said house. The cops had registered a case under Indian Penal Code (IPC) sections 153A, 153B, 124A, and 505(2) at the Chowk police station.

The residents had demanded immediate action and asked the police to ensure that such things do not happen in the future. The cops reassured the residents and removed the writing on the wall.

After the incident came to light, Divya Hagaragi, BJP leader, staged a protest outside Chowk police station. She and other BJP women activists demanded speedy action against the culprits. Accusing the cops of inaction, Divya reportedly said that while AIMIM leader Waris Pathan had delivered the hate speech in Kalburgi on February 15, Divya said case was registered against Pathan only after a complaint was lodged.

Few days back, pro-Pakistan slogans were spotted on walls of a school in Budarsingi village in Hubballi rural taluk in Karnataka. As per reports, the students and teachers found ‘Pakistan Zindabad’ and ‘Tipu Sultan Shaale’ scribbled on the walls.

Last month, Amulya Leona, the ultra-left wing protestor, was booked under sedition case for raising “Pakistan Zindabad” slogan in the presence of AIMIM chief Asaduddin Owaisi at an anti-Citizenship Amendment Act (CAA) rally in Bengaluru. She was sent to 14-day judicial custody bu the Karnataka police.