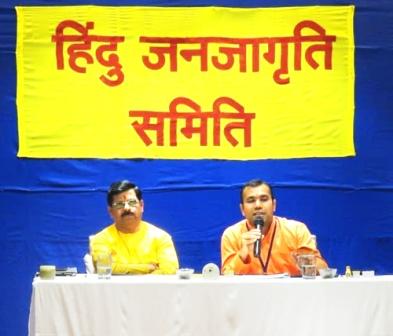 Sangli : Sapling of Hindu Janajagruti Samiti (HJS) was sown in the year 2002 which has now become like a fully grown banyan tree. Several attempts were made by different media to misrepresent this organization; but every time, HJS held press conferences and used social media to present the truth; therefore, media have been now taking note of HJS. This workshop was conducted with the help of donors and we are trying to repay the debt to society through the same, stated Shri. Manoj Khadye, HJS- Coordinator for Gujarat, western Maharashtra and Konkan regions, while addressing conclusion session of two-day ‘Hindu Rashtra Sanghatak’   workshop held on 11th and 12th January at Haridas Bhavan. Shri. Kiran Duse of HJS also addressed the participants on the occasion. All devout participants made a resolve to totally dedicate themselves in the mission of protection of nation and Dharma.

Participating devout Hindus decided to hold Hindu Rashtra-jagruti Sabhas at 8 places, hold ‘Gram- baithakas’ at 7 places, start ‘Dharmashikshan’ classes at 4 places and distribute handbills on the occasion of celebration of various religious and other festivals; so also motivate people to subscribe to Sanatan periodicals and staging ‘Rashtriya Hindu Andolans’ etc.

Everlasting nation with conditions which existed during regimes of Prabhu Shriram and Chhatrapati Shivaji Maharaj is expected ! – Manoj Khadye, HJS

Sangli : There was ideal governance during the regimes of Prabhu Shriram and Chhatrapati Shivaji Maharaj and it was also everlasting. It is remembered even today and will be remembered in future for thousands of years as ideal governance. We have to create such everlasting governance i.e. divine kingdom, stated Shri. Manoj Khadye, Coordinator of Hindu Janajagruti Samiti (HJS) for Konkan, western Maharashtra and Gujarat State while speaking on the subject of ‘Basic Concept of Hindu Rashtra’. ‘Hindu-Sanghatak’ workshop has been organized by HJS on 11th and 12th January at Haridas Bhavan. 50 devout Hindus coming from Jata, Kavathemahankal, Tasgaon, Palus and Ishwarpur etc are participating in this workshop.