Poochakkal, Alppuzha (Kerala) : ‘Bhagavat Saptah’ was recently held at ‘Veliyil Shri Bhadrakali Mandir’ which was inaugurated by Kum. Pranita Prasad of Hindu Janajagruti Samiti (HJS), by lighting lamp. This ‘Saptah’ is held every year. It was attended by the President of the temple Trust and its other members. Books and other ‘sattvika’ products of Sanatan were exhibited at the venue of the program. Kum. Prasad said, “Condition of Hindus has become most pathetic since they lack ‘Dharmashikshan’. Every Hindu should therefore, undertake spiritual practice and abide by Dharma.”

Lecture held at Kochi on importance of ‘Dharmacharan’ in daily life. 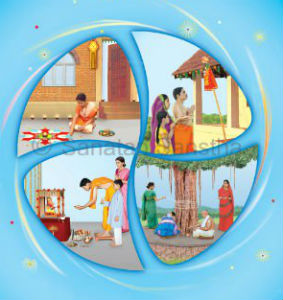 Kochi (Kerala) : HJS held lecture on importance of ‘Dharmacharan’ in our daily life. Kum. Rashmi Parameshwaran of HJS explained importance of ‘Spiritual Practice and Dharmacharan’. She also said that it was responsibility of every Hindu to protect Hindu culture and traditions.

Lecture at Kadavanthara on importance of Navaratri

Ernakulam (Kerala) : HJS was invited for holding lecture at Shri Subrahmanya Mandir of Kadvanthara for explaining importance of Navaratri festival. Shri. Balkrushna of HJS gave guidance on ‘Navaratri and Vijaya Dashami’. He also clarified doubts asked by many attendees. Some of them showed interest in attending HJS’ weekly ‘satsangs’. More than 40 people attended the program.