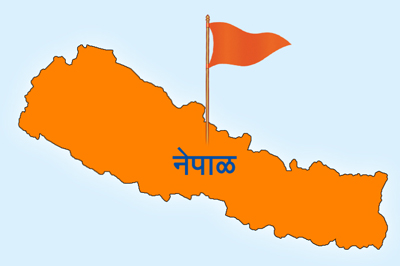 The youth have to decide the future of their nation!

The current education system teaches us different things, but things like how to achieve anand (Bliss) which is the true goal of this life, how to face difficult situations are not covered in the syllabus. The gurukul systems of yore wre based on the teachings of Sanatan Dharma, and would teach the students the importance of spirituality, and as such they would lead blissful lives. Today’s science has led us away from spirituality. Merely being educated does not guarantee a blissful life. We see that in the society there are many highly educated people who are sad because they don’t have jobs, people with money are not happy either. America, Europe have progressed scientifically. They have money power, but these nations have the most incidences of mental illness, child abuse, rapes. When a person is happy, then he thinks of improving the conditions of his immediate family and then the society, which in turn builds the nation. So the youth have to decide which direction they want to take their country to progress in. Sadguru (Dr.) Charudatta Pingale (National Guide, HJS) was invited to guide the students of the Kathmandu Shiksha Campus. Prof. Dr. Madhav Bhattrai (Founding member of the Campus, President – Rashtriya Dharmasabha Nepal) felicitated Sadguru (Dr.) Pingale. Former MoS Sou. Kanta Bhattrai, Campus manager Shri. Gupta and others were present.

Shri. Dhital has decided to regularly publish articles by HJS on Dharmashastra on the Navchetna News Portal.

Those who have the blessings of God and those who are on the side of Dharma win !

Sadguru (Dr.) Pingale spoke to leaders of various Hindu organizations here and discussed issued such as limitations and problems faced by leaders and their solutions. He said,

1. Many Hindu activists have some knowledge of karmakand (religious practices in Hindu Dharma), but not of Dharma itself. If we study the various aspects of Dharma, then we can effectively counter malpractices.

2. We try to increase our numbers. The numbers were in favour of the Kauravas, but the Pandavas who had Shri Krishna on their side won. Ravana had both numbers and the study of Vedas under his belt, yet Shriram won. This makes it very clear that those who have the blessings of God and those who are on the side of Dharma win !

3. WHen the leadership is able, the society automatically follows. When we accept the existence of the others, they too will accept us. When organizations realise that by cooperating with other organizations our own organizational strength will not diminish, unity of organizations can be achieved.

During the visit, Maharaj ji spoke about the importance of the 16 Sanskars to preserve Hindu Dharma. He said that ‘Hindu Dharma has 16 sanskars. Upanayan sanskar means to move beyond our two eyes and to awaken out third eye; but today the sanskars have become limited to the marriage and final rites. Brahmacharya means the path to realising Brahma! One should always remember the goal of final liberation (Moksha)’.