Thane (Maharashtra) : HJS organized nam sankirtans (mass chanting programs) and lectures in the district on account of Ganeshotsav. Lectures on how to celebrate an ideal Ganeshotsav were held. Also mass chanting of Ramnaam were also held at the homes of devout Hindus Shri. Ajay Bharambe, Shri. Girish Dhokiya, as well as the Vaishya Samaj Ganesh Mandal and for the teachers of the Deendayal Hindi School. Such lectures were also organized in Dombivali (West) and Thane. 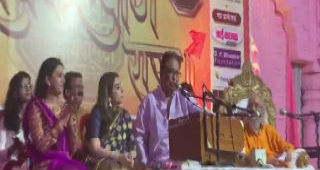 To mark the 60th year of Dr. Raghuvirnagar Sarvajanik Ganeshotsav mandal, they organized the ‘Shivkalyan Raja’ program presented by Shivshahir Babasaheb Purandare and Pt. Hridaynath Mangeshkar. This program took the attendees on a journey through the life of Shivaji Maharaj. Ms. Radha Mangeshkar sang the beautiful songs of Shivkalyan Raja.

The mandal also organized a Ganesh-yag which charged the atmosphere with chaitanya.

The mandal also exhibited Sanatan’s Holy Texts and informative prints. The mandal played only devotional or patriotic songs, and also ensured that the inhabitants of the neighboring areas were not incovenienced due to the loudspeakers by limiting the volume. The mandal also organises various social activities throughout the year.

Shri. Vinod Padiyar, a devout Hindu, is an advisor to the Tarun Mitra Mandal in Mulund. He, along with the mandal president Shri. Ganesh Landge distributed copies of Sanatan’s holy texts to those who had donated to the mandal. Through this they donated 100 copies of ‘Atharvashirsh’ and 31 copies of ‘Devipujemagil Shastra’ booklets.