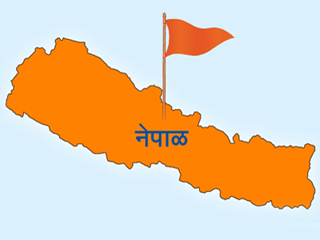 Sadguru (Dr.) Charudatta Pingale met Shri. Sagar Katuwal of ‘Manav Dharma Seva Samiti’ on 23rd August. Shri. Katuwal said, “Elections are contested and won in Nepal by creating anti-India atmosphere but people are realizing the truth now.” Regarding democracy, Sadguru (Dr.) Pingale said, “Contesting elections at grass-root level like for Gram-panchayat, then for State Legislative Assembly and then for Parliament will help in getting real experience. Nowadays, anyone contests elections for MLA or MP post and wins due to their belonging to certain families. They have no experience in this field. We look for education and intellectual capacity for recruiting person in government office even for the post of peon; but an uneducated person can become MLA or MP. There is no age limit for him. For successful democracy, there has to be certain eligibility criteria and age limit for elected representatives. They should be allowed to represent for maximum two spans.”

Happiness, peace and prosperity will exist in nation only when people walk on the path of righteousness ! – Sadguru (Dr.) Pingale

Sadguru (Dr.) Pingale also said, “Our mind thinks one thing and body does something else while intellect thinks something still different. Fight between body, action and thoughts is the cause of unrest in human. This fight ends with walking on the path of Dharma.”

Kathmandu – Shri. Rajendra Ojha of Kshatri Samaj called on Sadguru (Dr.) Pingale. Shri. Ojha said, “Various customs and traditions followed under Dharma are becoming expensive. Rituals have become more costly. People feel that solution was required to be found on the same.” Sadguru (Dr.) Pingale said, “Performing rituals is not costly but perverted customs and traditions started by people has led to more expenses on rituals. There is ‘Upasana-kaanda’ after ‘Karma-kaanda’ in Dharma. There is nothing improper in Dharma. In fact, Dharma teaches us to bring improvement in things happening in incorrect manner. People should have Rama and Krushna as their ideals; because people’s future is the future of that nation. Hindus need to have ‘Dharmashikshan’ to understand Dharma.”

Awareness will be created if information on sexual exploitation by Christian priests is exposed to people ! – Sadguru (Dr.) Pingale

Kathmandu – Sadguru (Dr.) Pingale paid goodwill visit to Shri. Vivek Paudel, Manager of GATE Vocational FAB School of Pokhara and his friend, Shri. Shreyaskar Singh, who is interested in working for prevention of conversions. They listened, with interest, to information given to them about various activities undertaken by HJS related to protection of Dharma. Sadguru (Dr.) Pingale said that imparting ‘Dharmashikshan’ to all Hindus was the only solution to stop conversions.

Sadguru (Dr.) Pingale said, “It is necessary to inform people about incidents of sexual exploitation of small children and nuns by Christian priests or members of clergy in churches all over the world. We can show paper-cuttings of news-items published on the Pope rendering apology for such incidents. It will create awareness amongst people and they will realize the importance of Hindu Dharma.”

Working for unification and Dharma is possible only with knowledge ! – Sadguru (Dr.) Pingale

1. True Dharma is the one that unites everyone. All organizations need to come together and work, instead of creating new organizations.

2. Dharma is harmed due to our getting stuck in Sects; lack knowledge on Dharma and due to unrighteous behaviour.

3. Acquiring knowledge helps in unity and working for Dharma. Knowledge of Dharma is essential before undertaking work for protection of Dharma. Our Dharma gives us freedom; but it doesn’t mean we can do anything.

Will a cell phone work if we remove SIM card and put any paper instead ? Having feeling of own greatness leads to destruction.

A great Sage and Guru of Shrīrām who practised the path of Devotion.

A famous master of statecraft in ancient Bharat. He is believed to have lived in 4th century B.C.  and was a great statesman and strategist.