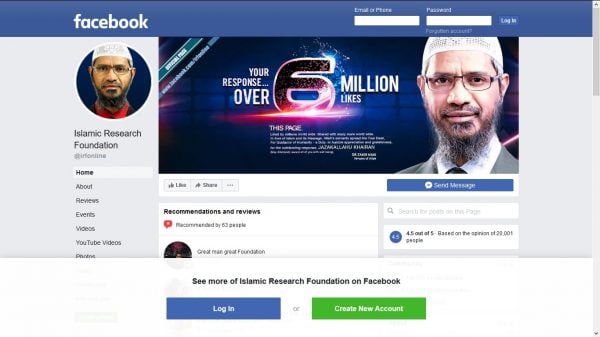 The ‘Islamic Research Foundation’ of Dr. Zakir Naik who is overtly supporting terrorism and propagating the ideology of terrorism was banned in India by the Indian Government on 17.11.2016. Even after that, the terrorists have committed bomb blasts in Dhaka, Bangladesh and Sri Lanka, by taking inspiration from the speeches of Dr. Zakir Naik. A chargesheet submitted recently by the Enforcement Directorate in the court mentions that the illegal property of Dr. Naik worth Rs. 193 crores was found.

Similarly, the National Investigation Agency has claimed that the literature of Dr. Zakir Naik was found with the terrorists of ‘Islamic State’ in Kerala. Therefore, if the Indian Government claims that Dr. Zakir Naik is dangerous for the national security, why the Facebook accounts of Dr. Naik himself and those of ‘Islamic Research Foundation’ have not been banned so far by the Government ?

If Dr. Zakir Naik is allowed to propagate through an effective medium such as Facebook, the ban imposed on him appears pretentious. Therefore, the ban should be imposed immediately on the Facebook and other social media groups of Dr. Zakir Naik and his organisations, demanded Mr. Ramesh Shinde National Spokesperson of Hindu Janajagruti Samiti.

An official complaint was lodged on 5th June 2017 with the Union Home Ministry, Home Secretary and National Security Agency by Hindu Janajagruti Samiti demanding a ban on both the Facebook accounts. A memorandum to this effect was also personally submitted to the Minister of State of Home Affairs Hansraj Ahir. Despite the lapse of 2 years, why is the Government has not taken any action in this matter ? Is the Government waiting for the terrorist attacks in India too on the lines of Bangladesh and Sri Lanka ? These questions were also raised by Mr. Ramesh Shinde.