Why such complaint has to be lodged ? Why the Govt. doesn’t take action on its own ? 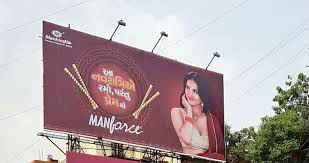 Baroda (Gujarat) : Big posters of advertising for ‘Manforce Condoms’ was displayed during the holy festival of Navratri celebrated by Hindus. The message given through advertisement was ‘Play Navratri but with love’. A complaint has been lodged on 25th September against ‘Mankind’ Company, the producers of ‘Manforce’ condoms for spreading indecency under the guise of advertisements during the auspicious festival of Navratri. The complaint has been lodged by Sou. Rekha Barve, Gujarat State Coordinator of ‘Ranaragini Division’ promoted by Hindu Janajagruti Samiti (HJS).

It has been stated in the complaint that a case has been filed against Sunny Leone even at Thane in Maharashtra and stringent action be taken against her. It has also been demanded that inquiry should be conducted into her sources of income, taxes paid by her since she has been  earning lot of money in India; what kind of VISA has been granted to her in India; whether based on such VISA, she was permitted to work in films and advertisements.

Surat : Representation submitted to District Collector against Sunny Leone and her ‘Mankind’ Company

Surat (Gujarat) : During the period of Navratri festival, advertisements of ‘Manforce’ condoms through big boards were seen with a photo of Sunny Leone on which it was written ‘Play Navratri but with love’. The advertisement boards have been found in Gujarat at some places. Hindu Janajagruti Samiti (HJS) has, therefore, submitted a representation to Dy. District Collector S. D. Vasava on 22nd September, through devout Hindus; viz. Sou. Rekha Agrawal, Kum. Darshana Chavan, Sou. Meena Indorewala etc, demanding that action should be taken against Sunny Leone and her company called ‘Mankind’.

Denigration of Hindu DharmaProtest by Hindus