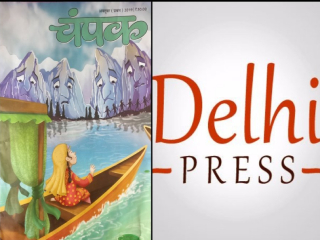 We live in tumultuous times. While radical Islam has gripped the world with millions of brutal deaths being attributed to the violence it unleashes on Kafirs, a cottage industry that mainly focuses on the demonisation of Hindus has thrived for decades, shielding the killers and maligning the victims. The modern-day Goebbels propaganda uses even children for its nefarious means unabashedly. A case in point being one of the latest editions of children’s magazine – Champak.

A Twitter user who goes by the handle @OnlyNakedTruth tweeted some screenshots of Champak’s October edition that focussed on Kashmir and the Modi government’s move to dilute Article 370 thereby suspending the special status that Kashmir enjoyed for decades.

Does anyone know why children's magazine Champak has become a leftist-Islamic tool of propaganda? Their Oct edition cover story is about Kashmir (came out after article 370 removal). It is encouraging kids to understand the difficulties faced by KMs there by writing to them. pic.twitter.com/er5msEOR2z 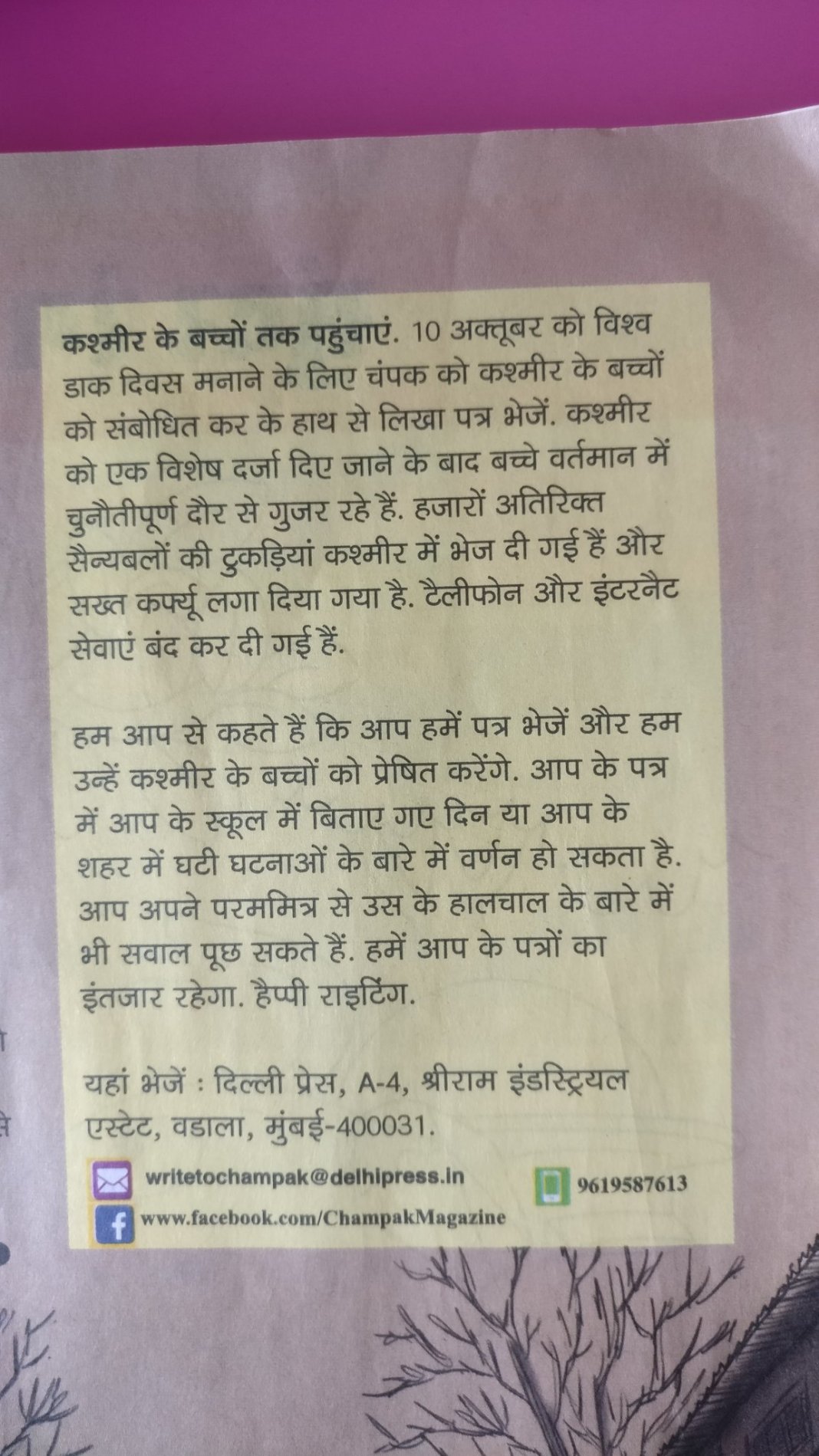 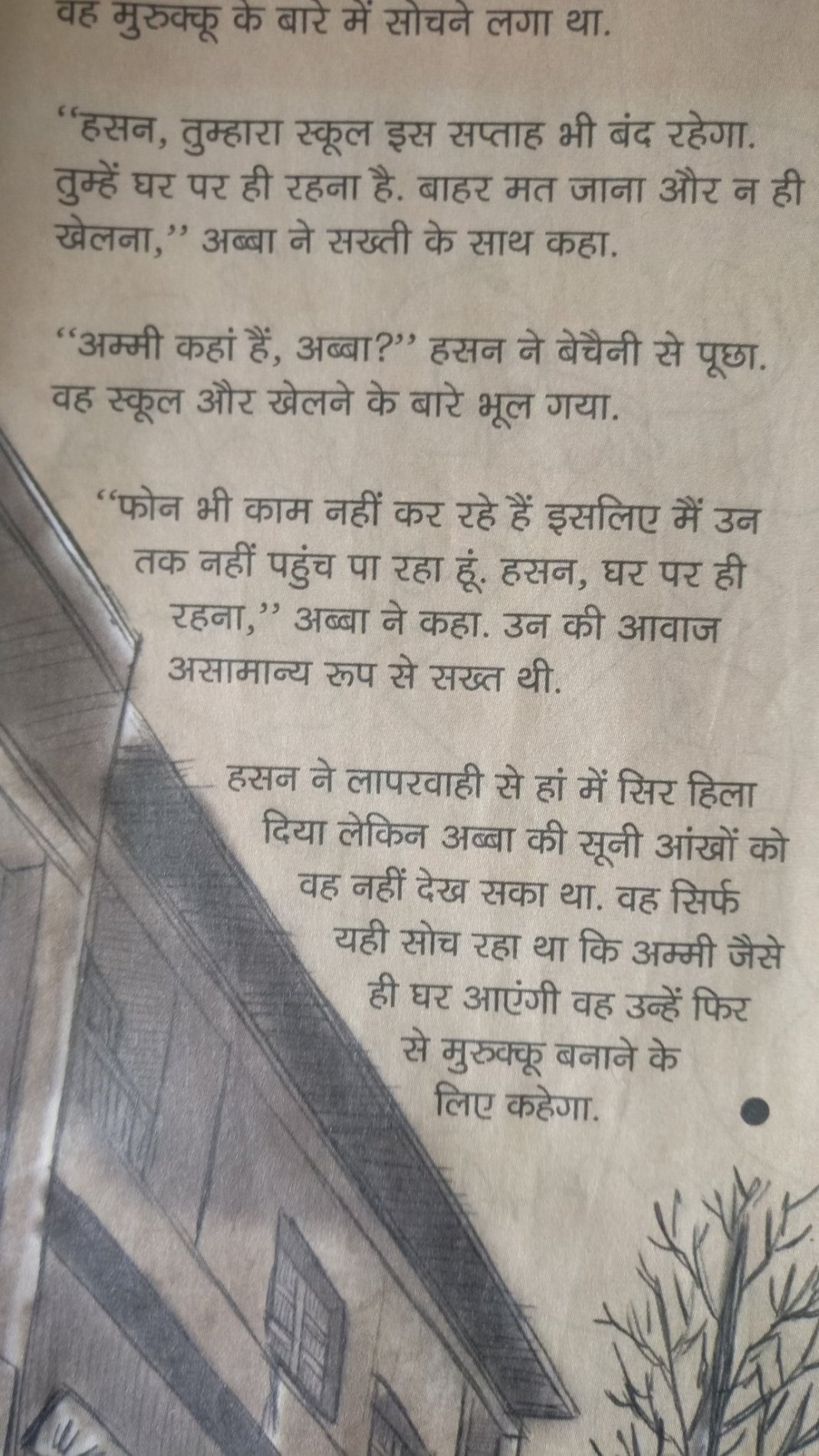 One of the screenshots shared by the Twitter handle urged children to write to other children in Kashmir. The portion in the Champak magazine October edition one can see the magazine appealing to children to write to their counterparts in Kashmir and ask them about the situation there. The magazine actually says that after the special status of Kashmir was revoked, there was been a strict crackdown in the valley. “Thousands of soldiers and Army battalions have been sent to Kashmir and there is a strict curfew in place. The telephone lines and internet services have also been suspended”, the magazine says.

In the next portions, Champak paints a grim picture of a little boy wanting to play and go to school, while the terrible Indian state and its oppression doesn’t allow him to do so. To top it all, it also talks about how the mother of the boy is not at home and the father is distressed about him not being able to contact her due to the phone lines not working.

While there is no disputing the facts, that there was indeed a crackdown on communication in the valley, Kashmir is a far more nuanced subject that cannot be explained to pre-teens and school children with an anecdote laced with sentimentality. The story obviously doesn’t tell the children about the rampant Jihad in Kashmir, the presence of ISIS and Pakistan sponsored terrorists, the fact that Hindus of the valley were cleansed or even the draconian effects of Article 370 on women’s rights and rights of other factions.

The dangers of indoctrinating children with pure sentimentality, sans facts are several and that is exactly what the Champak seems to be doing.

Delhi Press, under whose ages the Champak is published, has traditionally been far removed from ground realities and has often demonised Hindus and the Indian state in order to further the leftist propaganda, and hence, it is no surprise that children’s digest Champak has too gone that way.

Delhi Press is one of the largest publishing houses that offers 36 magazines in 10 different languages to its readers. Delhi Press was started in 1939 and it started first with its magazine Caravan in 1940. It also offered its flagship Magazine Sarita. Founder Vishwanath’s son, Paresh Nath is now the publisher and Editor-in-Chief of all the magazines under Delhi Press and Ananth Nath, the grandson of the founder who is the Editor of Caravan Magazine.

An interesting observation was made in an opinion piece published in IndiaFacts.org. The author wrote:

Paresh Nath is the editor of a mind-boggling number of 30 magazines of his own group. This is not normal for any big publishing house. This usually occurs when a strict centralized control is needed for maintaining ideological purity. His son, Ananth Nath, the third generation representative in the family, is the editor of the revived Caravan magazine.

At a time when atheism was unpopular even among adults, the children’s magazine, Champak churned out atheist propaganda, mainly aimed at Hinduism. Many stories showed how worshipping idols was superstition and how a worldview dominated by science should replace a culture dominated by religion, the religion always being Hinduism.

This does not seem far from the truth given the Champak’s latest short story on Kashmir.

Sarita, the use of the phrase ‘obscurantism’ and its Hinduphobia

Moving to other offerings of Delhi Press, Sarita, their flagship Hindi magazine bears testament to their rampant Hinduphobia.

The Delhi Press website itself describes Sarita as a flagship magazine that fights against “religious obscurantism” and “political authoritarianism”.

It is rather interesting that Delhi Press would use the term ‘fighting religious obscurantism’ to describe Sarita. It essentially means restricting knowledge in the hands of an elite few and is considered to be anti-democracy. And then, they couple of it political authoritarianism. Considering their anti-Hindu writing, one can only conclude that Sarita aims to questions the tenets of the Hindu culture and religion, which they have often viewed as ‘superstition’. ‘Obscurantism’ when used to describe a deeply anti-Hindu magazine can only be assumed to mean ‘anti-Brahmanism’ which is a trope that is often used by the Left to deride Hinduism falsely.

There are several titles of write-ups in Sarita that make evident its deep anti-Hindu slant. “Kavadiyas, the bearer of superstitious traditions”, “The Illusions of (Hindu) Pandits”, “A Fearful society under the weight of obscure (Hindu) customs”, “Vaastu, a charade of (Hindu) religion”, “The Evil Spell of Dharma” and “Money-making in the name of GharWapasi” are some of the articles that can be found in the magazine.

Here is what the current homepage of Sarita magazine, subsection ‘Dharm’ (religion) looks like: 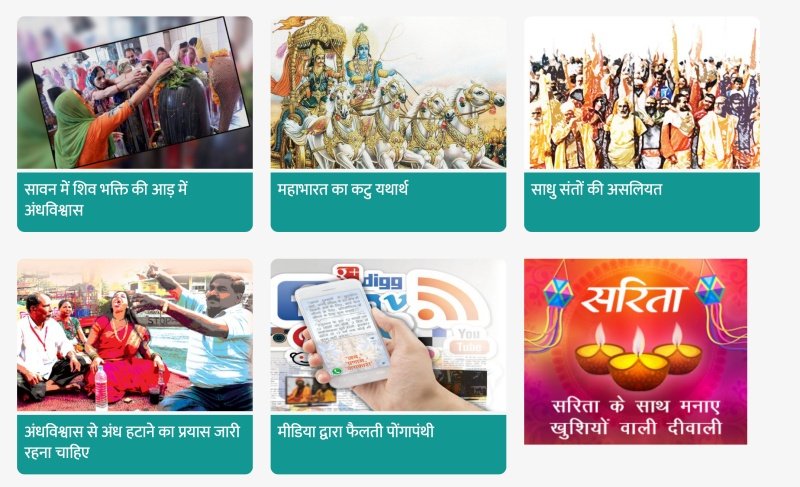 Every single article on the ‘Dharm’ home page derides Hinduism in one way or another barring one out of the 13 articles. From how Pujaris dupe devotees, to how ‘girls are on sale’ in a city of devotion. From claiming to ‘expose’ sadhus and saints to claiming that religion plays with blood.

Even further into their archives, one finds abundant articles that reveal that Sarita is almost on a mission to insult the faith of the Hindus.

Here is one such article from 2016

Essentially, the headline of the article says “Durga Puja glorifies superstition and hypocrisy”.

One can go on and on if one is to talk about the gutter level Hinduphobic articles that the Sarita has published in the past and even recently, as recent as October 2019. However, it is evident that Sarita, Delhi Press’ flagship Hindi magazine has launched a crusade against Hinduism for the past several decades.

The saga of Sarita’s Hinduphobia his not new. In 1957, a controversy arose in the poem “Ram Ka Antardwand” by Arvind Kumar which was published in Sarita. It spoke of the usual tropes of the banishment of Devi Sita and all the liberal propaganda around it.

Caravan Magazine was the first offering of the Delhi Press and was launched in 1940. The current day Caravan is a testament to how low Delhi Press has truly fallen in their quest of malign Hindus and, in turn, the Modi government since the Prime Minister received two sweeping mandates in 2014 and 2019 due to the consolidation of Hindus.

Caravan’s rampant Hinduphobia can also be turned into a book on how to malign an entire people, however, one such article bears witness to their disposition.

The Pulwama terror attack was a dastardly attack sponsored and orchestrated by Pakistan that claimed the lives of several Indian soldiers. The country mourned in unison. The country demanded vengeance against a terror state that painted the lanes of Pulwama with the blood of our soldiers.

While a nation rallied behind the armed forces, Caravan was busy counting caste.

In a morbid report by Ajaz Ashraf of The Caravan, he had conducted a ‘caste analysis’ of our martyred soldiers. In his report, the author mentioned calling the families of the deceased to inquire about their caste.

The Caravan’s Hinduphobia is such, that they did not even spare the martyred soldiers who were brutally murdered by Pakistan.

While their Hindu hate is rampant, they hate the government that came to power due to Hindu consolidation as well. The Caravan has conducted several shoddy hit jobs on Amit Shah, PM Modi, NSA Doval and his son. There have been several lies peddled and shameless propaganda furthered by the magazine.

With millions and millions of readers, the Delhi Press has cast a rather wide net. From the elite English speaking crowd that is catered to by Caravan, to the Hindi speaking belt that is taken care of by Sarita. The Delhi Press has clearly not even spared the children with the regular propaganda spewed by Champak.