Indur (Telangana) : Central Government should take immediate decision on displaced Kashmiri Hindus, will be the demand made through movement to be undertaken on 19th January 2017 called as ‘Chalo Kashmir’. In this background, a nation-wide drive called ‘Ek Bharat Abhiyan – Kashmir ki Oar’ to create awareness towards the proposed movement has been started with the initiative of 160 pro-Hindu and patriotic organizations from all over the country. Under this drive, 80 rallies will be organized in India for creating awareness amongst Hindus and fifth such rally was held in Indur. Despite rains, 900 devout Hindus attended the rally. Thoughts expressed by dignitaries are given below. 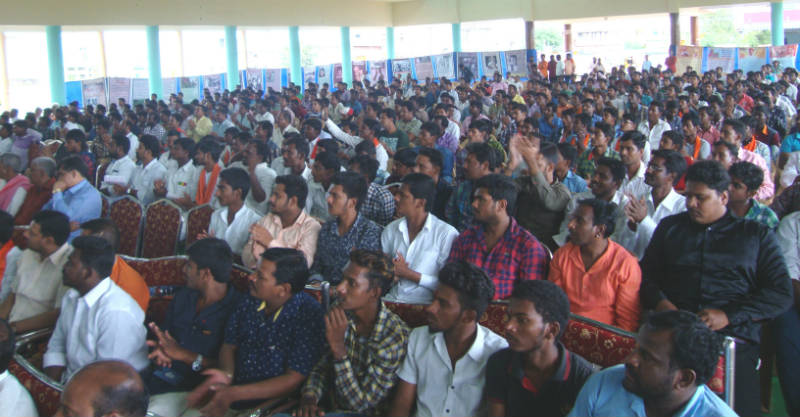 Fanatics from Kashmir only think about how to kill people ! – Rahul Razdan, Chief of ‘Panun Kashmir’, Southern India

Problem faced by Kashmiri Hindus is not restricted to Kashmir but has become problem at every place. It is impossible to say ‘I am a Kashmiri’ in Kashmir. The State Government has all papers giving information on Kashmiri Hindus but still the Government asks for proofs of our being Kashmiri. Fanatics can do anything and change whatever they want in Kashmir. It is not the first time that Hindus had to run away from Kashmir. It has happened in every century. Fanatics from Kashmir say that ‘You either convert and become Muslim or leave Kashmir’. No development has taken place in Kashmir. The only progress is in the ways of killing people.

Prime Minister Modi and BJP should stop grants extended for Muslims’ Haj pilgrimage. Had police taken stringent action on Kashmir’s problems, we would not have had to hold such rally in Indur today.

Under ‘Chalo Kashmir’ drive, one Hindu has to take ten Hindus with him ! – Tapan Ghosh, Founder President, ‘Hindu Sanhati’, Bengal

I thank Shiv Sena and Hindu Janajagruti Samiti (HJS) for taking up Kashmir issue in Telangana. If we fail in saving Kashmir, we will not be able to save even Kerala, Bengal and Telangana States. Islam is promoted in the name of Kashmir and we have to expose such charade. Under the drive of ‘Chalo Kashmir’, one Hindu has to take ten Hindus with him.

Terrorists shoot and kill our soldiers and our Government asks them to catch terrorists alive. Conditions in Kashmir are scary and we have to make people know about them.

Today, we all will make a promise to Kashmiri Hindus that on 19th January 2017, we will go to Kashmir and on 26th January, India’s flag will be hoisted at Lal Chowk in Kashmir !

3. VCD on miseries of displaced Kashmiri Hindus was shown on the occasion.

4. News about the rally was published by ‘K Six’ a local TV news channel.

Indur is better known as Nizamabad. On this, Shri. Ramesh Shinde said, “Earlier 2, 22,000 Razakars used to stay in Nizamabad; besides Nizam. Sardar Vallabh bhai Patel sent Indian army and Nizam was defeated within only 5 days. (There is a saying- ‘Nizam ko hajjam kar diya’; i.e. Nizam became like a barber) so, name of Nizamabad should have been Hajamabad. (Shri. Shinde made such sarcastic comment for people to remember bravery of Indian army and defeat of Nizam.)

One devout Hindu attending the rally commended HJS when he said that he learnt how to do everything systematically from HJS. You (HJS activists) do everything in proper manner.